This is a guest blog by Alicia Yodlowsky who is an undergraduate student of environmental studies at North Carolina A&T State University in Greensboro, NC.

The area surrounding the Walnut Creek Wetland Park in Raleigh, North Carolina, has an inspirational history of restoration work. From the 1990s onward, members of the community have worked to transform the once-polluted Walnut Creek, a tributary to the Neuse River, into a nature and wetland education center where children and adults alike can learn about the importance of keeping resources such as wetlands clean. The efforts of the community have continued beyond the original wetland cleanup events: today, work still continues to address pollution and flooding in the neighborhood.

Watershed cleanup efforts began on a small scale: parishioners of St. Ambrose Episcopal Church began to take the garbage out of the wetlands that bordered the church property. As time passed, the efforts grew in scale. Nearby churches began to collaborate in the cleanup efforts, and the Partners for Environmental Justice (PEJ) was formed for the purpose of restoring Walnut Creek and the development of a nature education center in the neighborhood. These combined efforts prevailed; the cleanups restored the wetlands to an ecologically beneficial resource, rather than a landfill. The community began to advocate for a wetland center in order to protect and bring engagement to the site, and by 2009, the Norman and Betty Camp Education Center was established and 58 acres of the wetlands surrounding it were preserved for use as wildlife habitat and to protect the community from further pollution. In 2019, the Center was officially incorporated into the City’s park system providing it with a higher profile and greater resources.

My Time at St. Ambrose

I recently had the experience of attending St. Ambrose Episcopal Church as a parishioner. I had the opportunity to see the rain garden that was installed there in person. The garden, complete with a detailed sign, is well vegetated, with beautiful flowers and lush plants. The rain garden is a major example of the many steps that St. Ambrose and the Southeast Raleigh community have taken to bring both aesthetic and functional green infrastructure and natural resources to the area.

Some small-scale examples of nature-focused work done at St. Ambrose include the many plants that are growing around the outside of the church; these were planted a while after I began attending St. Ambrose. I was able to assist in labeling each of these plants so that parishioners could know what type of plants they were if they were curious. I was also able to assist in renovating the church courtyard; I helped with landscaping, cleaning, and planting in the courtyard. During my time as a parishioner, I had the chance to see for myself the work that had been done by St. Ambrose, as well as the greater Southeast Raleigh community. I had the opportunity both to learn about work that had been done in the past to mitigate flooding and pollution as well as to learn about and see ongoing work throughout the area.

History of Neighborhood and the Creek

The Black community of Southeast Raleigh, including the neighborhoods of Rochester Heights and Biltmore Hills, have historically taken strides to mitigate flooding, address water pollution, create green spaces, and inspire learning and engagement regarding the Walnut Creek Wetlands.

The Walnut Creek wetlands were originally home to a variety of species of wildlife, and the wetlands also had ecological benefits, such as improving the creek’s water quality. The neighborhood of Rochester Heights was built near the wetlands in the mid-20th century, during segregation. Rochester Heights was the first subdivision for Black families in the city; it was also built in a floodplain. After the construction of Rochester Heights, further construction upstream caused water to be channelized and diverted directly and quickly into the creek. As development progressed in the area, the flood control afforded by the natural floodplain wetlands along Walnut Creek began to be overwhelmed. Homes, churches, and other buildings in the nearby community began to flood, and the flooding only worsened as time passed.

The City of Raleigh had also been using the wetlands to dump sewage and other waste in the 20th century. Private companies dumped garbage in the wetlands, and the site practically became a landfill. As the wetlands became strangled by garbage, the nearby predominantly Black community suffered more intense flooding coupled with the added health hazard of polluted floodwater from the dumpsites in the wetlands.

Facing a crisis of property damage, potential health risks, and the destruction of a natural resource, the residents of Rochester Heights took action and initiated the first cleanups without assistance from the City of Raleigh (who had caused part of the problem to begin with). The community started the first push to focus on green infrastructure and to address flooding and pollution. The community reached out to partners, including experts from NC State University, to collaborate and effect change.

Members of the community continued their work to address flooding even after the Walnut Creek Wetland Center was established. The historic disengagement by the City of Raleigh with the initial cleanup of the wetlands or in mitigating flooding in areas like Rochester Heights led to a sense of distrust by the community and they were unwilling to rely on the city for assistance regarding continued flooding. The community formed the Walnut Creek Wetland Community Partnership to focus attention on the watershed and the flooding issues the community was continuing to face. The Partnership is facilitated by the Water Resources Research Institute and College of Natural Resources at NC State University and in 2015 American Rivers was invited to join the effort listening to the partners discuss plans for potential solutions. American Rivers supported a rain garden project as a demonstration of how water could be better managed. Together, the partners built a rain garden at St. Ambrose Episcopal Church that both helped mitigate flooding and pollution and also provided a beautiful new feature adjacent to the church. The project was completed in 2017.

Walnut Creek Restoration Today and Into the Future

The Southeast Raleigh community continues its work on flood mitigation and pollution elimination, and it has gained momentum. The Walnut Creek Wetland Partnership has begun to rebuild the relationship between the community and the City of Raleigh. The City’s stormwater program has prioritized funding for projects that the community has identified as needed improvements to water management in the watershed.

In addition, work is in progress to incorporate land near Bailey Drive into the Walnut Creek Wetland Park. This work has been supported by the Parks with Purpose program of the Conservation Fund. The project aims to create a gateway with green space for community members. An art installation has already been created at the site that describes and celebrates the history of Rochester Heights, Biltmore Hills and the surrounding area. This temporary installation will be remodeled as a permanent installation at the Bailey Drive Gateway after construction is completed.

As someone who has attended St. Ambrose Episcopal Church and has had the chance to be a part of the church community, I feel honored to have witnessed these incredible and inspirational achievements. Working on smaller-scale projects in the church, like the restoration of the courtyard garden, has given me a great appreciation for the advocacy and effort required to achieve larger-scale projects in the community, such as the creation of the Walnut Creek Wetland Park and the Norman and Betty Camp Education Center. The restoration and flood mitigation work that was started by St. Ambrose parishioners in the 1990s has continued forward to this day, and the ongoing efforts have resulted in tangible benefits for the entire Southeast Raleigh community.

The Neuse River’s free-flowing nature provides great opportunities for communities to embrace it as... 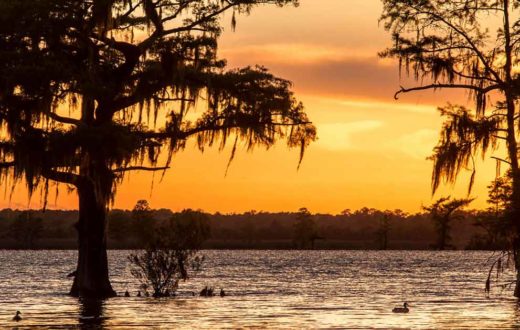 What started as an effort to remove trash on a North Carolina creek became... 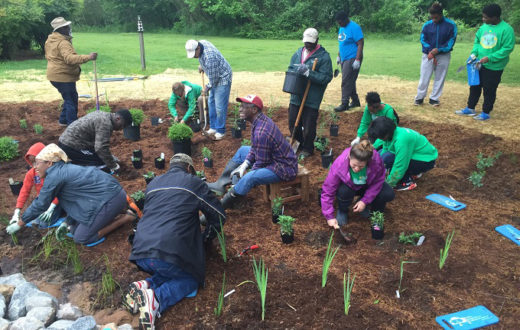