An Ode to Tributaries

Tributaries are a critical aspect of your river's drinking water.

We have a tendency to think about the water in our cup as a direct product of the local, mainstem river we presume it came from. But drinking water’s journey is rarely that straight forward. Because beer and rivers go so well together, it might be more accurate to think about that cup of drinking water more like a pint of beer.

Your favorite IPA, for example, is a unique blend of water, hops, malt, and yeast. Or say you’re not much for beer: your favorite cocktail might include equal parts gin and tonic, with a splash of lime. Unless you’re a beer nerd, you probably don’t know the specific hop varieties or source of the yeast fermented for your brew; or the herbs infused in your gin of choice.

Take the small, southwest Colorado town of Durango, for example. The Animas River (the River of Lost Souls) flows through town, providing some of the local communities’ drinking water and certainly of other communities downstream, while the Florida River (a tributary of the Animas River), provides most of the drinking water for Durango itself. Regardless, nearly all of the drinking water that pours from faucets in Durango is a unique blend of water filtered through high alpine meadows in the nearby Wilderness. Water that’s pumped from the Animas has its origins in mineral-laden streams from mining country near Silverton, CO, or snowmelt filtered through Ponderosa forests before cascading down Lime Creek, Hermosa Creek, and others, and converging with the mainstem. 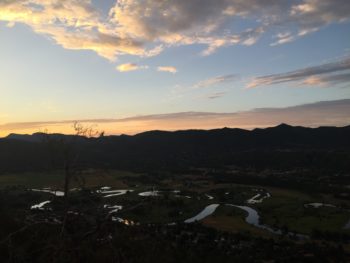 Animas River winds through the valley at sunset north of Durango, CO | Photo by Page Buono

Like a well-made brew, rivers are the sum of their lesser known but distinct and critical parts. And, as is often the case with small, important things, these distinct and lesser-known parts are most visible when they tarnish the whole.

During the summer of 2018, the 416 Fire burned over 50,000 acres of the Hermosa drainage on the outskirts of Durango. The fire remarkably and fortunately did not damage any structures or take any human lives (thank you, firefighters!) and it provided ecological benefits to the fire-starved landscape it burned through.

Flames settled in mid-July and scorched soil smoked as welcome monsoons poured down over the mosaic burn scar. On July 16, a particularly heavy rain sent a torrent of dark, thick debris pulsing down Hermosa Creek. The sludgy, ash-ridden flow joined the mainstem of the Animas River and, as it moved downstream, killed nearly 80% of the trout population. 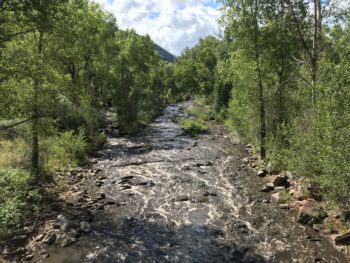 This kind of impact from flows on a tributary to a mainstem river isn’t altogether abnormal. Even without humans, tributaries of rivers like the Animas are often impacted by something like post-burn flows. Add humans to the landscape, and tributaries to the Animas (like many other rivers) are impacted by pollution from mining, nutrients from agricultural runoff or human waste, or other sources of pollution.

Before the 416 Fire, Hermosa Creek provided a critical burst of clean water to the main stem of the Animas, bolstering aquatic life and improving the overall water quality in the river. During the post-burn flooding and consequent muddying of the river, nearby tributaries like Junction and Falls Creek provided critical safe havens for fish populations.

In this way, tributaries work together as a system that, when healthy, provides clean water, critical habitat, and consistent flows.  It’s important to state here that the very influx of sediment, like from the post-fire Hermosa Creek, can be beneficial for rivers in the long run and are, in fact, part of the vital role tributaries play in providing nutrients to their connected rivers. This is especially evident for dam-impacted rivers that don’t receive a natural flush of nutrients during spring flows.

Consider another example: the Paria River in southern Utah. The sandy bottom and steep canyon walls usher much-needed sediment to the mainstem Colorado River in Arizona. In the post-dam era on the Colorado River, these inputs from the Paria are critical to the formation of sandbars and other habitat for riparian vegetation and wildlife habitat throughout the Grand Canyon.

But the Paria is ephemeral. And Hermosa Creek is small.

These qualities make both the Paria River and Hermosa Creek vulnerable under the Trump administration’s latest rollback of key clean water protections. In the wake of dangerous roll-backs of environmental policies—roughly 95 since his inauguration—the administration’s recent assault on clean water protections for small tributaries, wetlands, and ephemeral streams is particularly troublesome. According to a recent LA Times article, over 80% of Southwest streams would lose protections that help protect critical drinking water. In New Mexico, that number is closer to 96%.

These and other threats to critical headwater meadows, creeks and streams bring the need to view rivers on a watershed scale into sharp focus.

That’s why American Rivers is working  across the country and in the halls of Congress to protect important legislation like the National Environmental Protection Act and the Clean Water Act that reinforce the value of small, lesser known tributaries and meadows—taking a watershed approach, let’s call it a whole-brew approach, to the health of rivers, and to the clarity and safety of the water in your cup.