Wild & Free: 50 Years of the Wild and Scenic Rivers Act

Mike Fiebig spends his time chasing water in all forms as a longtime outdoor educator and river guide, as well as trying to protect some of it along the way as associate director for the Northern Rockies office of American Rivers.

This piece originally appeared in the 2018 Spring Issue of Outside Bozeman.

Here on the northern edge of the Greater Yellowstone Ecosystem, we sit perched on the headwaters of the continent. The mighty Missouri, Green, Yellowstone, and Snake river systems all originate within this landscape, and while the headwaters of these great rivers all flow from a highly-protected block of public land, only one of the four—the Snake River headwaters—is protected under the Wild and Scenic Rivers Act.

This year, on October 2, 2018, the Act will turn 50. A number of local streams are eligible for designation under the Act, and a lot of people in southwest Montana are working to make that happen. But before we can celebrate the Act’s future, we need to understand its past.

President Lyndon B. Johnson signed the Wild and Scenic Rivers Act into law in 1968, but the effort that ultimately got us there started much earlier—and right here in Bozeman. The 1950s and 1960s were the zenith of the big dam-building era in our country, and a number of proposed dams drew the attention of Montanans, including the Spruce Park dam on the Middle Fork of the Flathead River, in what is now the Great Bear Wilderness. 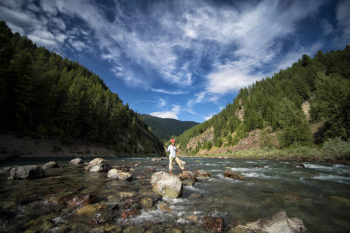 This dam, which would have been built by the Army Corps of Engineers, was to be a mirror of the Hungry Horse Dam one drainage south on the South Fork of the Flathead River. It would have backed up the Middle Fork some 11 miles, and was just one of nearly a half-dozen such dams proposed for the upper Flathead River system.

The Spruce Park proposal caught the attention of John and Frank Craighead, well-known wildlife biologists and conservationists, who might be best known for their pioneering work on grizzly bears in Greater Yellowstone. The Craighead brothers led the fight against the Spruce Park dam, and in 1957, John Craighead first proposed the idea of a federally protected system of “wild rivers” at a conference at Montana State University.

John and Frank would go on to publicize the need to protect wild rivers; a decade later, they were at the forefront of getting the Wild and Scenic Rivers Act passed, along with Interior Secretary Stewart Udall and senators Frank Church (D-Idaho), Gaylord Nelson (D-Wisconsin), Lee Metcalf (D-Montana), and Rep. John Saylor (R-Pennsylvania).

The Craighead family’s ties to Montana remain strong. Lance Craighead, executive director of the Craighead Institute in Bozeman, reflects that even though the brothers tend to be more well-known for their work as wildlife biologists, “my father Frank and uncle John always considered the Wild and Scenic Rivers Act to be one of the greatest conservation achievements that they contributed to in their lifetimes.”

Lance recalls that the two brothers’ river ethic started while canoeing the Potomac River, when they witnessed the degradation of rivers in the East. This awareness and concern grew during their many raft trips down wild rivers in the West after World War II. As with many modern-day river runners and anglers who fall in love with the waters they ply, these experiences turned into a desire to protect those rivers. “As kids, we grew up floating wild rivers with Dad and Uncle John,” recalls Lance. “Thanks to the Wild and Scenic Rivers Act, countless generations of other kids are able to do the same.”

Montana currently ranks seventh in the nation with a total of 368 Wild and Scenic river miles, about the same as New Jersey and Pennsylvania. We have four designated rivers: the Upper Missouri River through the Breaks, and the North, Middle, and South Forks of the Flathead River. This amounts to about 0.2% of the 177,000 river miles in Montana. According to the National Inventory of Dams, which is maintained by the Army Corps of Engineers, Montana currently has 2,960 dams. Montana hasn’t had a new Wild and Scenic River designated since 1976. Meanwhile, our neighbors in Wyoming, Idaho, and Utah added a combined 900 miles of new Wild and Scenic rivers in 2009 alone. Clearly, the balance between conservation and development intended by Congress when it passed the Wild and Scenic Rivers Act 50 years ago has not yet been struck. 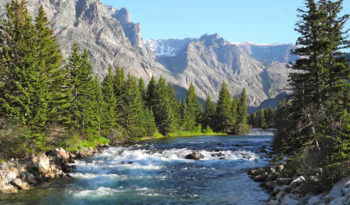 There are, however, a growing number of people in Montana working to change that. In December 2017, the bipartisan East Rosebud Wild and Scenic Act (S.501) passed the U.S. Senate by unanimous consent, and was introduced in the House. The East Rosebud bill would protect 20 miles of the stream as it flows through public land off the Beartooth Plateau, and has been championed by the broad-based local coalition known as the Friends of East Rosebud Creek, which includes virtually every rancher, business owner, and resident in the area.

In addition to East Rosebud Creek being on the cusp of becoming Montana’s next Wild and Scenic River, the state-based coalition, Montanans for Healthy Rivers, currently has over 1,000 Montana businesses and over 2,000 citizens endorsing its proposal to designate 50 new Wild and Scenic streams on public lands in the Crown of the Continent and Greater Yellowstone ecosystems.

In 2014 and 2016, bipartisan statewide polls on river issues in Montana found that three-quarters of Montanans support the Wild and Scenic Rivers Act, and two-thirds of Montanans support designating more Wild and Scenic rivers in the state. Furthermore, 85% of Montanans think that “rivers are highly important to our economy and way of life,” and nearly nine out of ten voters would like to see the number of protected rivers in Montana maintained or increased. Support for protecting Montana’s wild rivers is overwhelming, regardless of ideology, party affiliation, gender, age, or geographic region.

Montana’s business community is taking note of rivers, as well. Business for Montana’s Outdoors (BMO) conducted a survey that polled 200 businesses from every county in Montana, to find out opinions and perspectives on the connections between our outdoors, outdoor way of life, and the economy. Nearly three-quarters of business owners said that we can protect land and water and have a strong economy at the same time, and 70% claimed that the “Montana outdoor lifestyle” was a key factor in deciding to locate or expand their business in Montana. 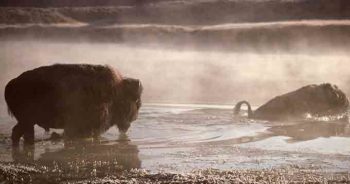 “Montanans and Montana businesses are clearly connected to their environment, whether we’re talking about an outdoor recreation business, a manufacturer, a marketer, or someone in the tech industry,” explains BMO’s Marne Hayes. “People are in Montana for our landscapes and waterways, for the value that those things bring to them personally, and for how they contribute to the culture of their business.”

Then there is the science behind the roles that wild rivers play for humans, fish, and wildlife in our changing and developing world. In many arid regions of the West, the writing is on the wall, and tough choices must be made—and made soon. Scott Bosse of American Rivers in Bozeman explains the urgency: “Given how climate change is rapidly shrinking our snowpack and the West is one of the fastest-growing regions of the country, I think we’re going to see a lot more dams and other water development projects proposed in Montana over the coming decades. That’s why we need to act now to protect our highest-value free-flowing rivers. It will be too late if we wait any longer.”

What does this mean for local rivers, you might ask? While Montana is sure to receive more riverside development in the future, and likely more dams as well, favorite streams like the Gallatin, upper Yellowstone, upper Madison, and Smith rivers all have local groups pushing for their protection. Kristin Gardner from the Gallatin River Task Force in Big Sky sums up the reason behind this interest: “Because of the Gallatin River, we not only live here, we thrive here—as individuals and as a community… Wild and Scenic protection would ensure that the necessary recognition and planning is in place to secure the long-term health of these irreplaceable resources for generations to come.”

“People are passionate about their local streams,” adds Charles Drimal of the Greater Yellowstone Coalition, which is working with Montanans for Healthy Rivers. “In communities like Livingston, Gardiner, Bozeman, and Big Sky, where rivers are just as much a cultural identity as a hydrological force, people want to see iconic rivers like the Yellowstone and Gallatin protected.”

The Future of Wild Rivers

Public lands and rivers, along with our nation’s system of national parks and preserves, have been called “our best idea.” In southwest Montana, we are fortunate enough to live this every day. But not everyone in this country is quite so fortunate. So, how do we maintain support nationwide for this “best” idea? 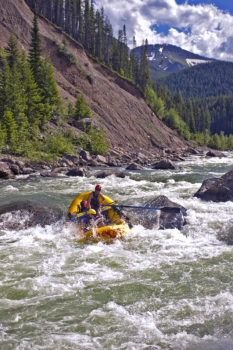 Rafting on the Middle Fork of the Flathead River, MT. | Photo: Lee Cohen

One way is to keep wild rivers relevant through stories. River stories are one of the most treasured cultural traditions in the outdoor world. Whether you’re spinning a yarn about that time you failed to properly tie down the raft and had to chase it downstream; when Grandpa almost landed a fish this big; when Liz swam the Kitchen Sink in April without spilling her beer; or when a bear loved the smell of frying bacon in the river kitchen a little too much—one and all, these river stories capture and spread the wildness that protected rivers help to maintain in our lives.

In celebration of the 50th Anniversary of the Wild and Scenic Rivers Act, the national nonprofits American Rivers and American Whitewater have teamed up with a number of outdoor gear companies to create 5,000 Miles of Wild. Their goal is to collect 5,000 wild-river stories and to protect 5,000 more miles of such rivers nationwide.

For many of us, what we love about protecting certain wild rivers is legacy. “The legacy of river protection under the Wild and Scenic Rivers Act will serve not only everyone today who cherishes our remaining natural rivers, but all the generations to come in an era when the values of our free-flowing streams will become increasingly evident,” says river author Tim Palmer. This is not to say that it will be easy. Our public lands and rivers are under attack, and it’s going to take a lot more people getting involved to protect them—outdoor recreationists, homeowners, farmers and ranchers, and businesses from every sector. We Americans are learning that conservation is difficult, and protection is not necessarily permanent, unless we all stand up for our wild lands and rivers. Wild rivers, fortunately, are one thing that almost all of us love and understand to be important and necessary. To put it simply, says Lance Craighead: “We need more of them.”

What will that require, you might ask? In John Craighead’s words from 2013, “It doesn’t require much more than having Congress understand how important those rivers are to all Americans. They’re about American as American can be.”