Guest blog in celebration of World Fish Migration Day by Matthew B. Ogburn.

I’ve only seen river herring in the Patapsco River once. A dozen silver flashes, finning among rocks on a warm spring day along the Grist Mill Trail upstream of Orange Grove. Place names hint of the mills, iron forges, and villages that once filled the Patapsco Valley.

Trains rumble by along tracks on the valley wall and planes fly overhead every few minutes on final approach to Baltimore/Washington International Thurgood Marshall Airport. Guinness is building its new brewery and barrel house just downstream. And Bloede Dam stands in the way of fish migrating upstream to spawning grounds, the birthplace of their ancestors for millennia.

The Alewife and the Blueback Herring (two fishes collectively known as ‘river herring’) are born in spring into the warming waters of rivers and streams flowing into Chesapeake Bay. Alewife like the water cool, arriving in March and staying through April. Blueback Herring prefer the warmer waters of April and May. Like salmon, they are anadromous fish that migrate from the ocean into freshwater streams to spawn. Unlike the stereotypical salmon which dies after spawning, many river herring migrate repeatedly between the ocean and freshwater streams to spawn for several years.

Young river herring spend much of their first year in the protected waters of tidal rivers and marshes. As the cold of winter arrives, they swim to the relatively warm waters of the mid-Atlantic continental shelf. Maturing between ages 3 to 5, they may live to an age of 8 years or more.

The Alewife returned to Patapsco River a few weeks ago. Among the many returnees were several fish tagged by my research team from the Fish and Invertebrate Ecology Lab at the Smithsonian Environmental Research Center. (My team is on the river every week and sees many more herring than I do!) We use Passive Integrated Transponders, or PIT tags, which are the same ‘microchips’ that your dog or cat may have, to track the migrating fish. These are the first river herring recorded returning to the Patapsco for multiple spawning seasons!

It’s an exciting finding, because it confirms that the same individuals return to the river each year. These fish, or their kin that we tag in 2018, will be among the first in over 100 years to access up to 65 miles of habitat upstream of Bloede Dam. Thirty-five feet tall and an engineering marvel of its time, the long-dormant hydropower dam will be removed later this year. It is another step in the transformation of Patapsco Valley from industrial center to scenic State Park.

Will the herring pass the site of Bloede Dam? Will they pass the sites of Simkins Dam (removed in 2011) and Union Dam (removed in 2010)? Will they reach Daniel’s Dam, soon to be the last remaining major dam on the mainstem Patapsco River, or even use its fish ladder to move further upstream? We’ll be watching and waiting for them, learning the lessons individual fish have to teach us about the resiliency of two species that have survived despite a multitude of threats.

River herring are still in the Patapsco River because a few herring avoided the nets of foreign and then American fishing fleets that decimated populations in the 1950s-70s. Today, some fish are still caught accidentally in offshore fisheries, but efforts are in place to minimize those impacts. After migrating into Chesapeake Bay to the mouth of Patapsco River, they swim past Ft. McHenry and through the industrial Port of Baltimore before entering fresh water. Generations of herring have persevered in the degraded lower reaches of the river, where water power made the Patapsco Valley an engine of the Industrial Revolution.

Will river herring populations in the Patapsco River stage a comeback after the removal of Bloede Dam? Spawning runs 10 times greater occur in the Choptank River, much of which has never been dammed, and Marshyhope Creek, where a centuries-old dam washed out in 1935, giving hope that access to habitat will spur a recovery. Whether or not herring populations increase, removing Bloede Dam is a major milestone in the restoration of the Patapsco River and its valley, a conservation success story in the heart of the Washington-Baltimore Metropolitan Area.

Dr. Matthew Ogburn is a Principal Investigator and Research Scientist at the Smithsonian Environmental Research Center in Edgewater, Maryland. Matt specializes in fish and invertebrate ecology.

One response to “Removal of Bloede Dam: A Ray of Hope for River Herring”

Baltimore’s rural river escape is where the “Star-Spangled Banner” earned its stripes. 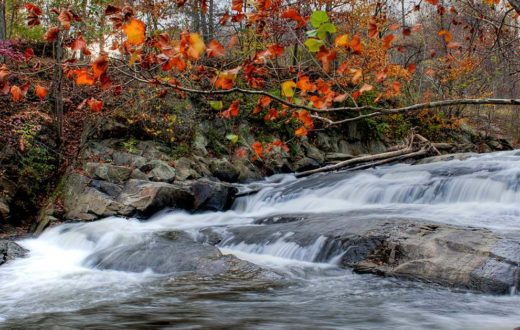