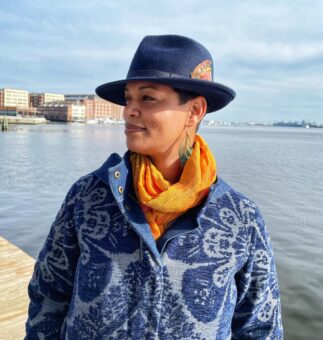 We observe and celebrate Black History Month 2022 with a reprise installment of “Our Favorite River Songs,” featuring selections from the Black musical tradition. As the new Vice President for Diversity, Equity, Inclusion, and Justice, I am excited to engage my arts and humanities background in Black studies and gender studies, and apply it to our exploration of river songs!

River stories are not only about the wonders of the natural world. Rivers have deep cultural and spiritual significance. Many spirituals in the Black musical tradition reference rivers as a location for celebration, a site of metaphorical crossing into The Promised Land from a biblical standpoint, and as a very real opportunity for escape and self-emancipation.

Deep River — a traditional spiritual refers to the river Jordan, and “That Promised Land where all is peace.” Marian Anderson, the first African-American singer to perform at the Metropolitan Opera, and Jessye Norman, the ground breaking majestic African-American soprano, have performed Deep River, accessing profound wells of emotion and heights of classical prowess.

Just as Anderson and Norman communicate both painful histories and creative renewal through their river songs, Revelations, the signature work of choreographer Alvin Ailey employs the traditional spiritual Wade in the Water to soulfully represent a river baptism. Through the use of white fabrics flowing across the stage and the resonance of the river song, this work celebrates rivers as a site of purification and exultant community gathering.

Rivers also are a frequent thematic in the blues musical tradition. One of the most well-known blues and jazz standards, originally written and sung by Bessie Smith, is Backwater Blues. Although the inspiration for this song is most frequently thought to be the 1927 great flood of the Mississippi River, researchers have attributed this song to the devastating 1926 flood of the Cumberland River. Another notable blues artist engaging this theme is Big Bill Broonzy, known for his song Mississippi River Blues. Broonzy wrote two songs about the 1937 floods along the Ohio River, Terrible Flood Blues and Southern Flood Blues.

The legacy of these river songs can be heard in many contemporary compositions as well. As a part of their curriculum in the Milwaukee Water Commons’ “Water School” summer education program, youth participants from True Skool wrote and produced Liquid Gold a song and music video about their relationship to water.

Can you hear the confluence of environmental and racial justice as a theme flowing through all of these songs? Keep sharing your favorite river songs with us in the comments.