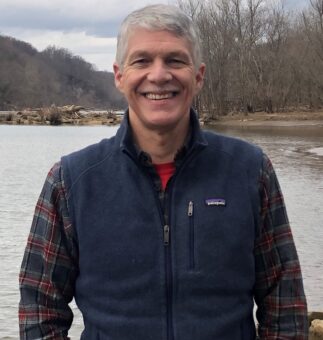 “We begin in water and we return to water,” contemplates Juanita Wilson, an enrolled member with the Eastern Band of Cherokee Indians, whose traditional lands span what are now eight states across the Appalachian Mountains.

She reflects on the Cherokee’s traditional relationship with rivers: “The Cherokees have always viewed the river as ‘Long Man (Gunahita Asgaya),’ whose head lay in the mountains and the feet in the sea. Long Man (or Long Person), was a revered figure among the Cherokee as one who provided water to drink, cleanliness, food, and numerous cultural rituals tied to medicine and washing away bad thoughts and sadness.”

American Rivers honors this relationship the Cherokee have with rivers, and we honor the deep, diverse connections that other Indigenous Peoples have with rivers and water. Across the country, tribes are caring for the land and are powerful leaders advocating for clean water and healthy, free-flowing rivers. Many are leading successful efforts to revive traditional knowledge in their communities and apply their skills and wisdom to protect and restore rivers especially in this era of climate change.

On Oregon and California’s Klamath River, for example, the Karuk, Yurok, Klamath and other tribes have led the effort to remove four dams to bring back salmon runs and improve water quality, with dam demolition scheduled to begin in 2023. In the Northwest, the Nez Perce Tribe, Confederated Tribes of the Umatilla Indian Reservation, Yakama Nation, Upper Snake River Tribes, and others are leading the effort to restore a free-flowing lower Snake River, in what would be the biggest river and salmon restoration effort in history. The Navajo and Hopi have fought to protect the Grand Canyon from harmful development. And the United Tribes of Bristol Bay were instrumental in killing the notorious Pebble Mine proposal that would have devastated the world’s biggest salmon runs.

It is important to also acknowledge that deep injustices persist toward Indigenous People. Tribes were forced out of their homelands and away from their sacred rivers and traditional food sources and continue to this day to disproportionately feel the impacts of dams, pollution, and inequitable water management decisions. Climate change, which is bringing increasingly severe floods and droughts, is exacerbating these current problems. For too long, Indigenous People have been kept out of decision-making and marginalized by the mainstream environmental movement.

We have a responsibility to do better. If we are to heal our relationship with rivers, if we are to confront the climate crisis and adapt to its on-going impacts, the traditional ecological knowledge and perspective held by Indigenous People is essential. Ensuring tribes play a leadership role in forging river conservation solutions is vital to the future of the environmental and river movement, and our nation as a whole.

On Indigenous Peoples Day, I ask you to join me in the small step of committing to learn more about the ancestral lands where you live and work (https://native-land.ca/ is one resource), and to support Indigenous-led river conservation efforts in your area.

On October 20 in western North Carolina, Juanita Wilson is inaugurating a river cleanup. She says her goal is to “live our connection with Long Man by cleaning trash out of waterways. However, this is much more than a one-time ‘river cleanup,’ it is a cultural awakening and/or re-awakening. Honoring Long Man Day cleanups will continue into the future.”

Today and every day, it is leaders like Juanita who are providing the vision and determination that our rivers and communities need to thrive.