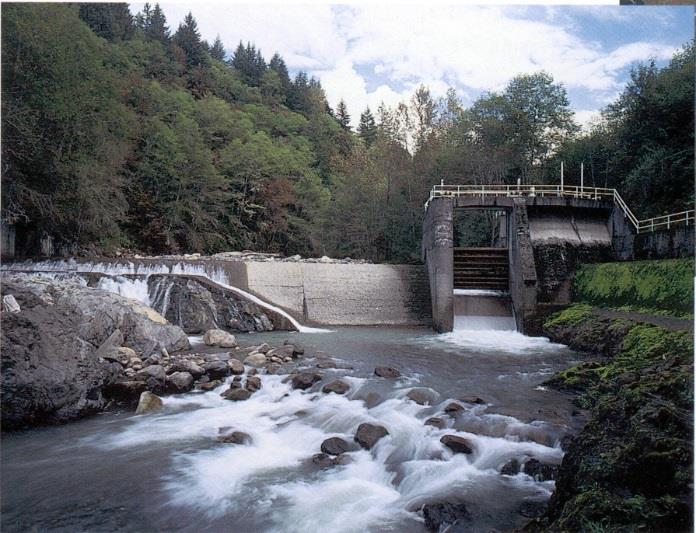 Local partners, engineers and construction crews worked under extraordinary circumstances to complete these projects, delivering a wide range of benefits to their rivers and communities. For example, on the Middle Fork Nooksack River near Bellingham, Washington, removing a water diversion dam and installing a new water intake opened 16 miles of habitat for salmon, restored cultural resources, and ensured a sustainable supply of clean water for the city. The project, an effort of American Rivers, the Nooksack Indian Tribe, Lummi Nation, City of Bellingham, Paul G. Allen Family Foundation and others demonstrates the power of public-private partnership and innovative solutions to infrastructure challenges.

More than 90,000 dams block rivers in the U.S. Dams harm fish and wildlife habitat and ecosystem health and can pose safety risks to communities. The failure of Michigan’s Edenville Dam in May 2020 was the latest high profile example of the threat aging, outdated dams pose to public safety. A recent UN report highlighted the growing risk of aging water infrastructure.

American Rivers’ report, Rivers as Economic Engines, outlines how investing in water infrastructure and river restoration creates jobs and benefits the economy. For example, according to a study by the University of North Carolina, the ecological restoration sector directly employs approximately 126,000 workers nationally, and supports another 100,000 jobs indirectly, contributing a combined $25 billion to the economy annually.

On a much larger scale than the projects featured on the 2020 list, Congressman Mike Simpson (R-ID) recently shared a vision for infrastructure investments in the Pacific Northwest that includes removal of four dams on the lower Snake River, which would be the biggest river restoration effort in history. While details need to be addressed before legislation can be enacted, Congressman Simpson’s proposal illustrates how river restoration can be part of transformational solutions that include clean energy, agriculture, job creation and economic revitalization.

Some other interesting projects from around the country in 2020 include:

The South Branch of the Gale River was blocked by a 21-foot high concrete and earthen dam in Bethlehem, New Hampshire, in White Mountain National Forest. The dam was a complete barrier for fish and disrupted natural riverine processes. The Littleton Water and Light Department (LWLD) constructed the dam and associated infrastructure in 1955 for water supply; however, it was no longer in use and had become a maintenance burden. In keeping with the original Special Use Permit from the Forest Service, the dam had to be removed if it was not in use. Removal of the dam was a priority as measured under several river connectivity prioritization methodologies and will restore connectivity to approximately 15 miles of river above the dam and approximately 21 miles of river downstream of the dam. Working together on this project, the partners included the LWLD, American Rivers, New Hampshire Department of Ecological Resources, New Hampshire Fish and Game, U.S. Fish and Wildlife Service, The Nature Conservancy, and the U.S. Forest Service.

This project, led by staff at the Francis Marion-Sumter National Forest, removed a dam that had created a recreation lake because the spillway was undermined. This earthen dam was built in 1990, and its spillway was damaged by spring 2020 rain events. The U.S. Forest Service (USFS) decided to remove the dam due to increased risk of failure during 2020 hurricane season (before scheduled repairs could be completed). USFS repurposed part of funds intended for culvert replacement by U.S. Fish and Wildlife Service (USFWS) to pay for dam removal. A USFWS restoration team did the construction. USFS intends to use this as a demonstration site to show dam owners in the Piedmont/foothills what a restored site looks like. This project restored the aquatic community and potential rare species habitat for Bartram’s bass, removed a safety hazard, eliminated ongoing maintenance costs to taxpayers, and promoted greater climate change resilience.

The Elkhart River Dam, an approximately 8-foot-tall low-head dam, was built around 1890 to increase the elevation of the river to divert water into raceways that were used to power industry in downtown Elkhart, Indiana. Over time as development occurred, these raceways filled and the dam no longer served a purpose. The dam gave rise to the name of Waterfall Drive, the street located adjacent to the former dam. The former dam was located approximately one-half mile upstream of the Elkhart River’s confluence with the St. Joseph River. With the Elkhart River being the largest tributary of the St. Joseph River, this dam served as a significant barrier to fish migrating out of the St. Joseph River. The dam’s removal reconnected 40 miles of upstream habitat, allowed for the recolonization of 16 species of fish in the Elkhart River and population integration for approximately 50 fish species, including endangered or threatened species (e.g., greater redhorse, longnose dace, and northern brook lamprey).

﻿This dam removal reestablished the connection between the Rattlesnake Wilderness at the headwaters and the Clark Fork River for the first time in more than 100 years. Ultimately, all manmade structures will be removed, 1,000 feet of stream channel will be restored, and 5 acres of wetland and floodplain will be created. A public-private partnership was formed to accomplish this project between the City of Missoula, Missoula Water, Trout Unlimited, the Watershed Education Network, and the Montana Department of Fish, Wildlife and Parks.

The Tulalip Tribes worked with the City of Snohomish and many project funders to completely remove two adjacent dams on the Pilchuck River in Washington State primarily to provide unimpeded threatened and endangered species fish passage to over 36 miles of pristine upstream habitat for the benefit of Chinook, coho, chum, and pink salmon, steelhead trout, bull trout, cutthroat trout, and a variety of other aquatic species. The project is expected to increase fish stocks, increase safety, reduce risk from potential dam failure, and increase recreational opportunities.