A closer look at how a popular whitewater river gained Wild and Scenic protection, and why a dam removal added to the enjoyment of this special watershed. 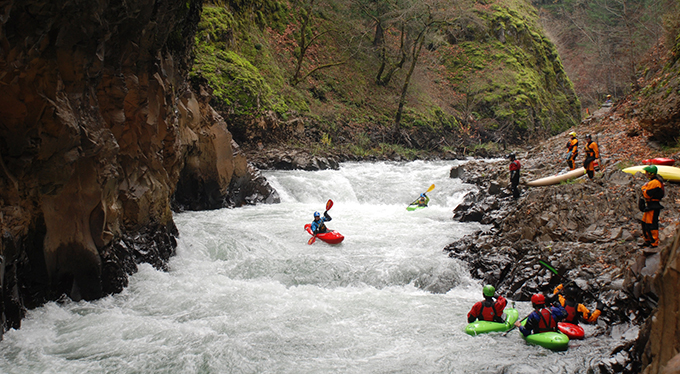 Susan Hollingsworth fires up Steelhead Falls at approximately 2′ on the Husum gage, her first run down the newly restored Lower Gorge of the White Salmon River following the removal of Condit Dam. For nearly a century the river was diverted by the dam and placed in a pipe to bypass this section of river that now flows freely. Photo by Thomas O’Keefe.

This is a guest blog by Gregory Fitz and Dakota Goodman.

In October of 1968, President Lyndon B. Johnson signed the National Wild and Scenic Rivers Act into law. The legislation had been sponsored in Congress by Senator Frank Church of Idaho. The National Wild and Scenic Rivers system was conceived around the remarkable idea that some rivers were so valuable to the cultural and environmental legacy of a region that they, and some of their surrounding area, should be preserved as natural, free-flowing waterways for the benefit and enjoyment of future generations. Since then, almost 13,000 miles of 208 rivers across the country have been protected. Six of those rivers are in Washington.

To celebrate the 50th anniversary of the National Wild and Scenic River Act, we’re going to spend some time over the course the year telling the stories of Washington’s designated rivers: Illabot Creek, the Klickitat River, the Pratt River, the Skagit River, the White Salmon River and the Middle Fork of the Snoqualmie River. Each is a unique part of Washington’s astounding network of rivers and each earned its designation in the national system through the hard work and foresight of advocates.

We’ll begin with the White Salmon River, one of the initial rivers in Washington to earn the National Wild and Scenic River designation.

The White Salmon River originates among the glaciers and snowpack of Mount Adams. It flows South 44 miles to join the Columbia River an hour’s drive east of Portland, Oregon. Its watershed encompasses approximately 400-square miles. It is a tumbling, fast moving river that flows through a long, vertical wall gorge and contains a series of Class III-V rapids, placing it among the most popular whitewater rafting and kayaking rivers in the Columbia River basin, with many expert paddlers flocking to the lower gorge, challenging even the most experienced boaters. 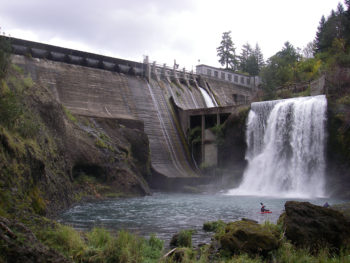 Kayaker in the pool at the base of Condit Dam on the White Salmon River. Photo by Thomas O’Keefe.

The river supports a healthy population of rainbow trout. Historically, it also supported substantial runs of steelhead, coho salmon, and fall and spring Chinook salmon. The construction of Condit Dam in 1913 blocked those migratory species. When the dam was breached in 2011, salmon and steelhead were able to reach upstream spawning habitat for the first time in nearly one hundred years. Standing 125 feet tall, Condit Dam was the largest dam removed in the United States until both Elwha River dams were knocked down a couple years later.

The White Salmon River flows through the ancestral territory of the Klickitat People. They are a Shahaptian tribe and many are currently enrolled members of the Confederated Tribes and Bands of the Yakama Nation. The Klickitat People encountered Lewis and Clark’s expedition in 1805.

Condit Dam had been built in 1913 and by the 1970s, seven additional dam projects were being proposed along the White Salmon. Advocates feared these dams would bury the river’s dynamic character and bedrock geology underneath endless acres of reservoir water. A passionate group of volunteer advocates formed the Friends of the White Salmon River and worked tirelessly to prevent the proposed dams. Fortunately, they were successful, but their advocacy didn’t end when the dams were stopped.

A broad coalition of local residents, business owners, environmentalists and management officials began to push for the White Salmon to be included in the National Wild and Scenic Rivers System. The pointed to the water quality, basalt gorge, timber resources, whitewater recreation, a Native American longhouse and cemetery and the potential to restore anadromous fish populations as reasons for its protection. The opportunity arrived in 1986 when the Columbia River Gorge National Scenic Area Act was signed by President Reagan. Because the confluence of the Columbia River and White Salmon River is within that designated area, it made perfect sense to also designate the lower reach of the White Salmon as a National Wild and Scenic River. 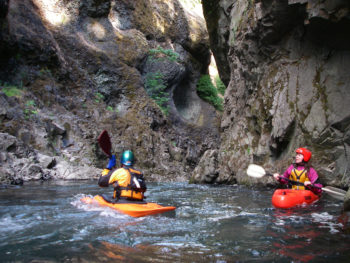 After the designation of the lower reach, the broad coalition of advocates kept working. They pushed for the additional designation of the headwaters to preserve the White Salmon’s unique geology, steady flow of cold, clean water and native fish habitat. Partnering with managers in Washington and the U.S. Forest Service, they were eventually able to get the upper reach added to the Wild and Scenic Rivers National System in 2005.

Simultaneously, many of the advocates were working to breach Condit Dam. After many false starts and intense dialog between government agencies, local communities and the power company that owned the dam, this would happen only a few years later.

Due to its consistent flow and steep gradient, thousands of boaters race along the White Salmon’s rapids, waterfalls and gorge every year. The removal of Condit Dam added five miles of additional river to run. This recreational traffic supports a robust tourist economy and provides visitors a thrilling opportunity to experience an aggressive Washington river in its glory.

As the rafters and kayakers head downstream, native fish are swimming upriver again. Researchers are finding steelhead and salmon spawning in the site of the old reservoir and, especially, on the headwater gravel and tributaries protected and preserved by the Wild and Scenic River designation. With a bit of luck, their numbers will continue to grow as the fish continue to take advantage of protections provided by this important legislation.

Next month, we’ll be profiling the Klickitat River, another one of the six Wild & Scenic designated rivers in Washington.

2 responses to “Fifty Years of Wild and Scenic Rivers: The White Salmon River”