In its 1,200 mile course to the ocean, the river flows through four mountain ranges and drains more water to the Pacific Ocean than any other river in North or South America. It once produced the largest salmon runs on earth, with returns often exceeding 30 million salmon per year; today, only a fraction return to spawn.

The river also provides drinking water to numerous communities along its course, and irrigates 600,000 acres of farmland.

Between the U.S. and Canada, the river’s 19 hydroelectric dams provide about half the region’s supply of electricity, in addition to providing flood control benefits. However, the dams have also played a major role in the decline and extirpation of numerous salmon and steelhead populations, including 13 stocks currently listed under the Endangered Species Act. Populations of Pacific lamprey and sturgeon have also been impacted, and water quality has declined as a result of the dams.

Dam and reservoir operations have fundamentally changed the Columbia River’s natural flows. Spring run-off is captured behind dams, thereby reducing flows and hampering the migration of young salmon headed out to sea, exposing them to predators in a series of slow-moving reservoirs. Reduced flows also harm the health of the Columbia River estuary by shrinking the size of the river’s freshwater plume— an area that hosts a variety of fish and bird species and accommodates the salmon’s gradual adjustment to living in saltwater. Dams have also blocked salmon from thousands of miles in the upper Columbia River system, including tributaries such as the Spokane and Kettle rivers in Washington and numerous rivers in British Columbia.

Releasing more water from behind Canadian and American dams in the spring can help restore healthier flows for salmon and other species, even as climate change sees earlier snowmelts and a higher likelihood of winter precipitation falling as rain rather than snow. Combined with improved dam operations, floodplain and estuary restoration projects, and building fish passage at currently impassable dams, the future for the Columbia River’s salmon, steelhead, and other species could be surprisingly bright. Conversely, failing to prioritize ecosystem health on par with hydropower production and flood control under the Columbia River Treaty could condemn the river and its fish and wildlife to further decline.

The Future of Hydropower
We cannot responsibly meet our nation’s energy needs by damming rivers or by weakening... 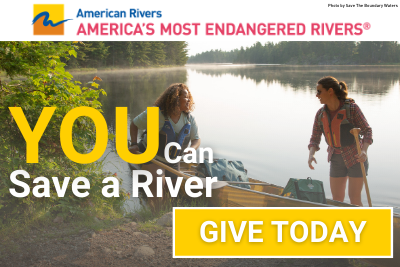