This is a guest blog by Ethan Duvall

Salmon spawning rivers of the Pacific Northwest are home to some of the largest and most spectacular Bald Eagle congregations in North America. Each winter, hundreds to thousands of eagles migrate to these rivers from breeding areas as far north as the Yukon Territory, brought together for one main reason: to feed on post-spawning chum salmon carcasses.

After swimming long distances upstream from the Pacific Ocean and through the open waters of Puget Sound, chum salmon complete their life cycle by spawning, laying eggs, and dying within the upper river channels and tributaries, in their natal water. Freshly deceased salmon carcasses wash onto river banks and gravel bars along the river, providing an abundant and reliable food source for eagles and other wildlife during the cold winter months. Although this amazing wildlife phenomenon has occurred for as long as humans have observed, humans have issued many threats to salmon populations in this region, jeopardizing the eagles that depend on their carcasses. 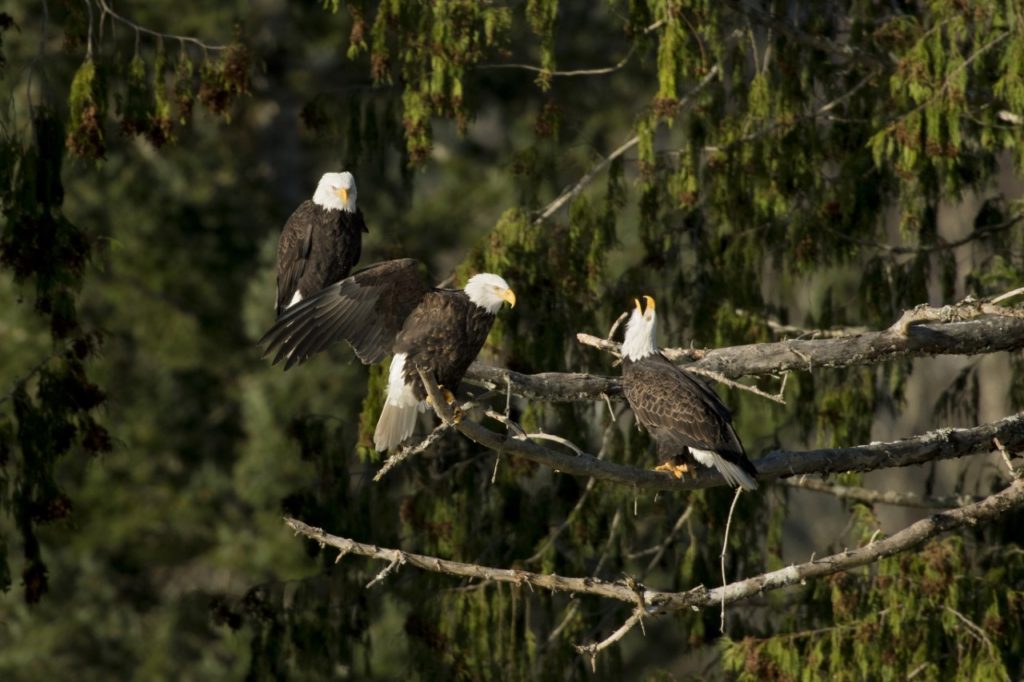 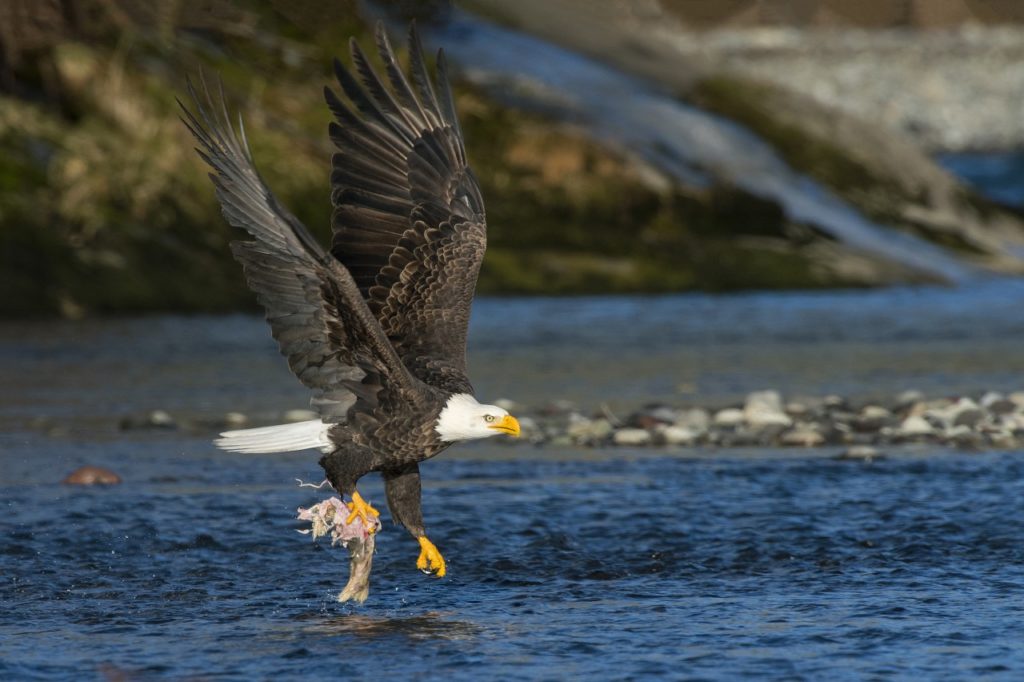 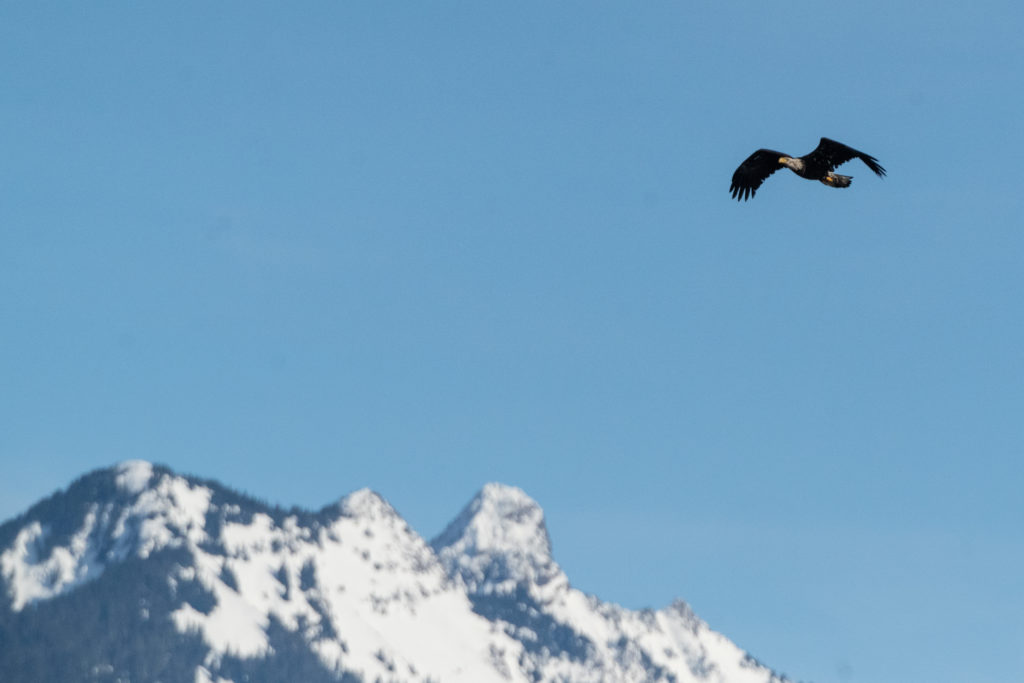 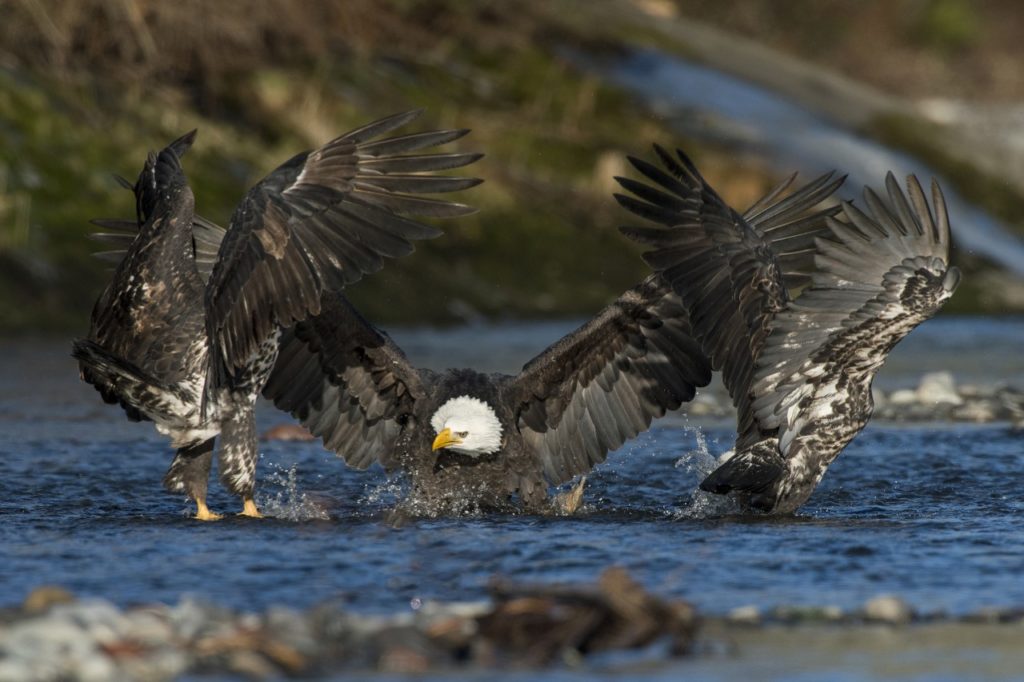 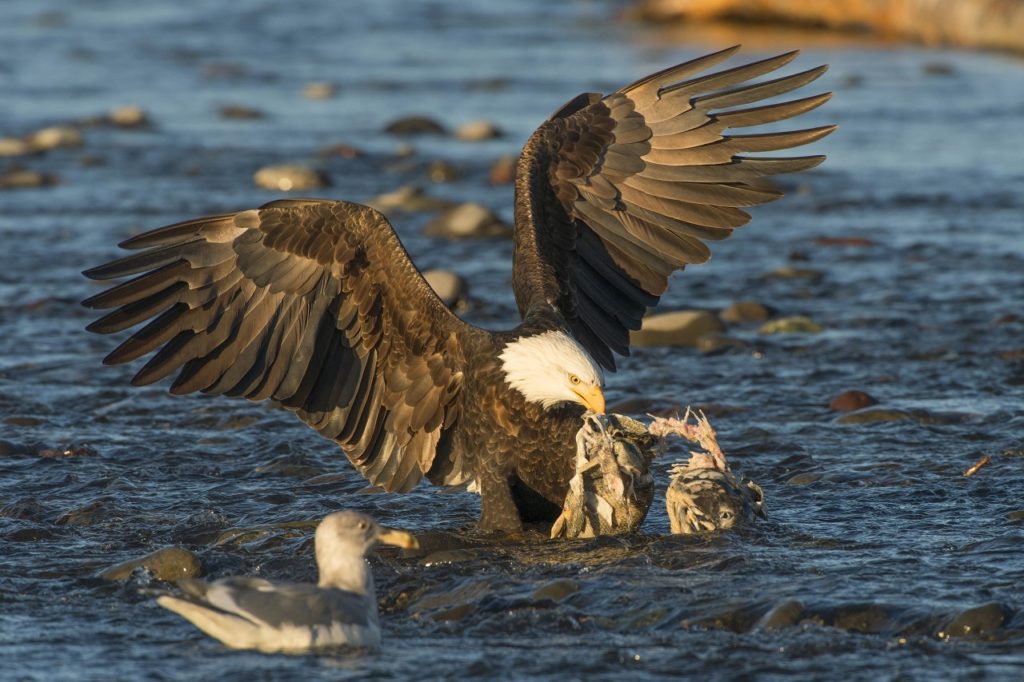 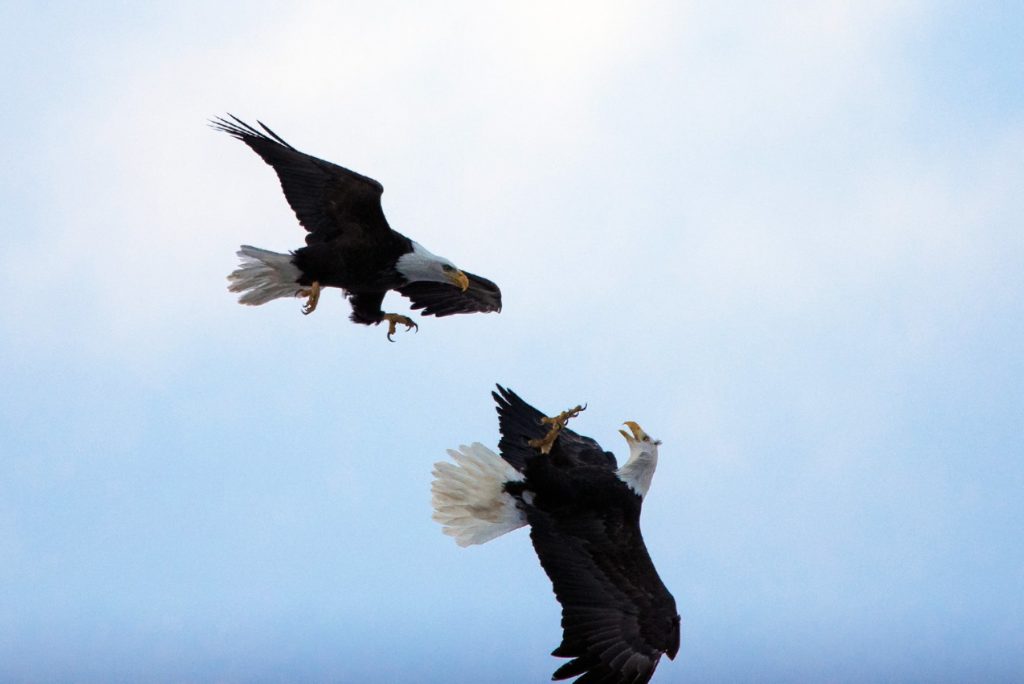 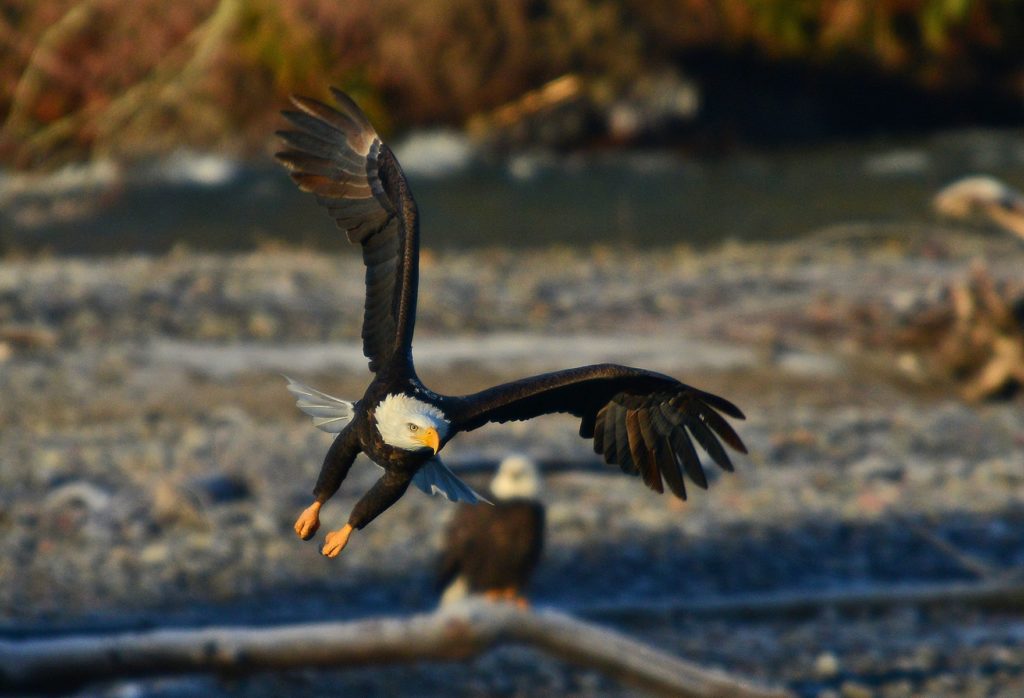 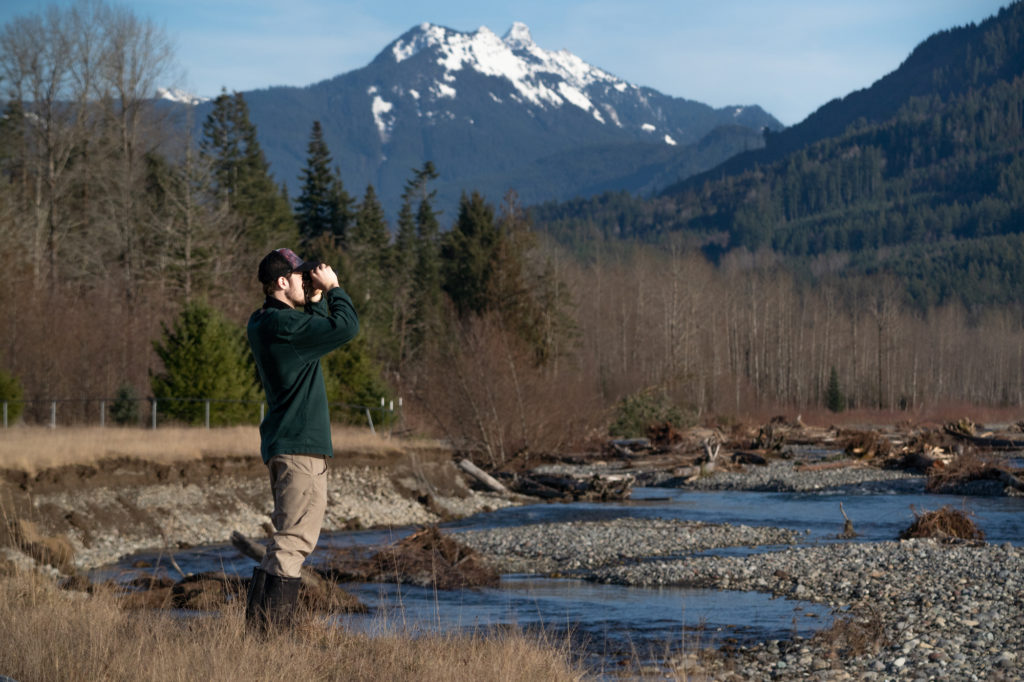 The Skagit River, draining a 1.7 million-acre area of the Cascade Mountain Range, has historically hosted the largest eagle congregations within Washington state. However, a recent publication1 by the North Cascades Institute highlighted an unfortunate reality: the abundance of over-wintering eagles has dramatically declined on the Skagit River over the last two – three decades. These declines were correlated to an overall reduction in carcass availability, driven by steady declines in salmon runs, impacts of climate change, and other anthropogenic stressors. Although much of the Skagit River received proper protection under the Wild and Scenic Rivers Act in 1978, its designation was after the construction of three large dams between 1926-1930, which have been restricting fish passage, altering natural flow regimes, and obstructing downstream sediment deposition for almost a century.

As the carrying capacity for eagles continues to decline on the Skagit River, many have begun to worry about the sustained presence of eagle congregations on rivers in Washington. Eagles are highly adaptive, generally concentrating in areas where food is most abundant and easily accessible. Some scientists presume that eagles are now utilizing other rivers more intensely in response to changes in resource availability. Given these speculations, I became curious about the condition of bald eagle congregations on another historically productive salmon spawning river: the Nooksack River.

The Nooksack River, draining a 500,000-acre area of the Cascade Mountain Range near Mt. Baker, is highly admired for its pristine habitat, recreational use, and the clean water it provides to native tribes and heritage farm towns. Unlike the Skagit, as well as many other rivers in Washington, the Nooksack remains free-flowing and absent of any major dams, allowing for natural fluvial processes and soon-to-be unimpeded fish passage. Despite being a much smaller river than the Skagit, the Nooksack has supported a greater chum salmon run than the Skagit River for five of the last eight years.

Although the Nooksack is generally acknowledged for its eagle congregations, its attention has been largely overshadowed by that of the more famous Skagit River. The most recent studies assessing eagle abundance on the Nooksack precede the 1980s, providing no real insight as to how populations have changed over time or responded to recorded declines on other rivers. For this reason, I set out to assess the current abundance and distribution of bald eagles on the Nooksack River. During the winter of 2018-19, I conducted weekly bald eagle surveys along a 19-mile stretch of the river between the towns of Deming and Maple Falls, Wash. Among the many awestriking sights and sounds that I observed throughout my study, what I recorded was truly inspiriting.

Over 650 eagles were detected utilizing the Nooksack River in late December, an abundance over six times greater than recorded between 1974-1977, and a density over three times greater than recorded on the Skagit River in the same year. Eagles filled the trees along the Nooksack River, concentrating among the many salmon spawning tributaries and sloughs. Eagles were spread across the river banks and gravel bars, feeding on the rich salmon carcasses the river had gifted them. The scene was miraculous, truly representing one of North America’s most amazing wildlife phenomena.

In spite of its rare beauty and clear importance for both people and wildlife, the majority of this vital river system remains deprived of even the most fundamental protection. Many of the threats endangering eagle congregations on other rivers, such as the Skagit, still remain a threat to the Nooksack; some 40 hydroelectric dams have been proposed for various sites on the Nooksack River since the 1970s, and the legacy of logging impacts and other human development remains along portions of the river.

In the interest of preserving the river’s value, the Nooksack River Wild and Scenic campaign is currently working toward introduction of legislation that will help protect the Nooksack River and its amazing wildlife. The Wild and Scenic Rivers Act designation would ensure that the river’s “outstandingly remarkable values,” including its prosperous chum salmon runs and extraordinary eagle congregations, are protected and enhanced in the future. The legislation would prevent any new dams or other projects that would degrade the river’s rare natural character and healthy flows.

As the carrying capacity for eagles declines on other rivers in the Pacific Northwest, the Nooksack River continues to become an increasingly rare and important place of refuge for eagles during the winter. By protecting the Nooksack River under the Wild and Scenic Rivers Act, we can help ensure that this beautiful river will continue to support the extraordinary salmon runs and bald eagles congregations that characterize the Pacific Northwest.

3 responses to “Eagles, Salmon, and a Free-Flowing River”