Today marks the 51st Anniversary of the Wild and Scenic Rivers Act.  While certainly not as splashy as last year’s high profile 50th today provides a great opportunity to take stock of the major steps the river community has taken to achieve the goals of our 5,000 Miles of Wild Campaign to protect and defend our nation’s remaining free-flowing rivers.

Along with our partners NRS, REI, OARS and Yeti, American Whitewater and others we launched this campaign in 2017 to protect 5,000 miles of rivers and 1,000,000 acres of riverside lands by October 2, 2020. Despite a political environment that has been openly hostile to conservation over the past couple of years, we and our partners have made great progress and have protected nearly 1,900 miles of rivers — and over 5,000 more miles are in the hopper.

Communities from Massachusetts and Montana have rallied behind protection of their backyard rivers. The hard work of groups like the Nashua River Watershed Association, Friends of the River, the Farmington River Watershed Association, Molalla River Alliance, and K.S. Wild helped organize river communities in support of these new designations. The rivers that these groups helped protect include East Rosebud Creek in Montana, important tributaries of the Rogue River, the Molalla, and Elk Rivers in Oregon; the Wood-Pawcatuck Rivers in Rhode Island and Connecticut; the Amargosa River, Deep Creek, Surprise Canyon and other desert streams in California; the Green River in Utah; the Farmington River and Salmon Brook in Connecticut; and the Nashua, Squannacook and Nissitissit Rivers in Massachusetts and New Hampshire.

In addition to these legislative protections we have also helped secure new administrative Wild and Scenic River protections for over 1,200 miles of rivers and nearly 400,000 acres of riverside land on public land that will keep them free-flowing and protect their outstanding values. In Oregon and Washington on the Malheur, Wallowa-Whitman, and Umatilla National Forests we helped secure Wild and Scenic eligibility determinations for vital tributaries of the Snake and Grand Ronde Rivers. Similarly in Montana on the Flathead, Custer Gallatin, and Helena-Lewis and Clark National Forests we won key long-term protections for portions of the Gallatin, Madison, Yellowstone, Boulder, West Boulder, Stillwater, Smith and Dearborn rivers.

We also worked with filmmaker Shane Anderson and Pacific Rivers which produced Run Wild, Run Free, a film about the passion and people protecting rivers as Wild and Scenic. Check it out if you can.

There are over 1,200 miles of new Wild and Scenic designations moving their way through Congress that could be protected as soon as this year or early next.  This includes nearly 500 miles of rivers flowing in the Wild Olympics in Washington, nearly 400 miles of northwest California’s remaining free-flowing rivers and streams including the Trinity and Eel River watersheds as well as over 150 miles of streams along the central coast, and 120 miles of the York River and tributaries in Maine.

River communities in several states are hard at work advocating for new Wild and Scenic protections that, based on my experience, I am confident will lead to designations in the near future. These include Deep Creek in Colorado, New Mexico’s Gila and San Francisco Rivers; rivers in the Greater Yellowstone and Crown of the Continent in Montana, the Nolichucky in North Carolina and the Nooksack in Washington State.

Finally we are advocating for thousands of miles of new administrative Wild and Scenic River protections as a part of the development of new management plans for our public lands across the country. In California U.S. Forest Service is finalizing plans right now that will protect at least 720 miles of eligible Wild and Scenic Rivers including strongholds for the rare Golden Trout, the California state fish on the Inyo, Sequoia and Sierra National Forests.  Check out this great video to see how you can get involved.

With all of the energy around Wild and Scenic Rivers there are many opportunities get involved. Help us reach 5,000 Miles. Tell your river story, get involved in a local campaign, or start your own for your backyard river. 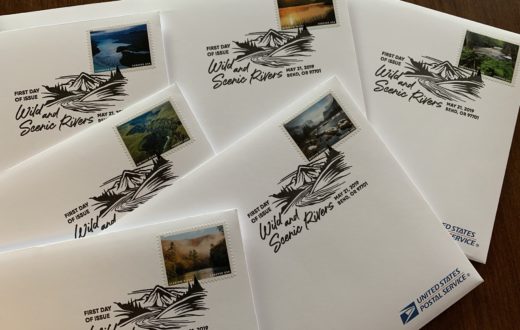