The South Fork of the Skykomish River in Washington’s North Cascades is a treasured watershed for many important values — recreation, scenic, critical fish and wildlife habitat, and even suitable for a Wild and Scenic designation. But unfortunately it is still ground-zero for a proposed hydropower project located at scenic Sunset and Canyon Falls.

In 2011, the Snohomish County Public Utility District (SnoPUD) began the regulatory process to study the feasibility of the Sunset Falls Hydroelectric Project to be located on the South Fork Skykomish River near the climbing and boating community of Index. The proposed run-of-river hydroelectric facility for the Sunset and Canyon Falls reach would reroute water from a 1.1-mile stretch of the river, in violation of the Washington Department of Ecology’s instream flow rule, sending it through a roughly 2,200-foot underground tunnel to a powerhouse at the base of Sunset Falls, thus reducing Sunset and Canyon Falls to a trickle (the initial proposal called for an inflatable eight-foot high by 55-foot wide weir which would have been placed at the top of Canyon Falls and diverted through a shorter tunnel and powerhouse). Seven years later, SnoPUD is hoping to file a final license application with the Federal Energy Regulatory Commission (FERC) sometime this year.

Surrounded by wilderness on both sides, the South Fork Skykomish River and its headwaters flow from deep in the Cascades, draining a breathtaking and fairly untouched 835-square-mile watershed. It is the proud centerpiece of communities along its riverbanks, with many residents who fish, paddle, and enjoy the variety of general river recreation opportunities the river offers.

If you’re an angler, a member of the Tulalip or Snoqualmie tribes, or an orca living in Puget Sound, you probably have an interest in the imperiled runs of native salmon, steelhead, and trout. And with ongoing habitat restoration work being completed throughout the basin, the threats from this proposed project are just too risky and undermine many of these large-scale and significant habitat investments. Additionally, the Washington Department of Fish and Wildlife (WDFW) has been operating a trap-and-haul facility for these ESA-listed species since 1958 and trucking them above the falls (they are a natural impassable barrier to fish passage) in an effort to open up more habitat to aid recovery efforts. While the current trap-and-haul facility, located at the base of Sunset Falls, helps with upstream fish heading to their spawning grounds, the proposed project would adversely impact the downstream migration of salmon and steelhead smolts in the spring. And although the SnoPUD is dangling a $1.5-million carrot in the form of a trap-and-haul facility upgrade to WDFW, the plan doesn’t adequately address outmigrating smolt issues.

This section of the river is also popular among the whitewater community, with Sunset Falls once a traditional starting point to the classic run known simply as ‘the Sky.’ And because of these outstanding fish, wildlife, recreation, and scenic values, the South Fork Skykomish has been singled out for by a variety of state, regional, and federal agencies for protection. In 1990, it was recommended by the Forest Service as suitable for Wild and Scenic designation. The Northwest Power and Conservation Council identified it as a Protected Area from hydropower development. And it is recognized as the only Puget Sound river in the Washington State Scenic River system.

It Doesn’t Add Up

And while the Skykomish is a scenic jewel in the heart of a breathtaking landscape that is worthy of protection, this proposed project, no matter where it was located, has many flaws. For starters, the economic feasibility of the project doesn’t pencil out. Since 2013, the proposed construction costs have risen almost 30 percent, from a low estimate of $173-million to a high of up to $260-million dollars. The output from the powerhouse would max out at 30 megawatts (MW), or enough energy, according to SnoPUD research, to power up to 10,000 homes, but would be limited and dependent on minimum stream flows. So realistically, the project’s actual capacity given limited seasonal flows would be more around 14 MW.

An independent study from 2013 estimated that the power produced by the completed project would be two to three times more expensive than if SnoPUD were to simply buy the power from the existing grid— an added expense that would likely be passed on to ratepayers. Even SnoPUD’s own data show that the project is highly likely to operate at a loss for the first 30 years.

Is Nature Stepping In?

While these issues and protections might not be enough to halt what some residents call a ‘zombie’ project (five various hydropower projects have been proposed at this site since the early 20th century by various utilities), Mother Nature might be getting in the last word.

Since 2013, the hillside directly south of the bedrock of Sunset Falls has been sliding and on the move ever since. With a constant trickle of water that seems to come from within the hillside, there are many residents who speculate the river is reclaiming an old course and rerouting to a channel that existed during the glacial age. Should the 300-foot-tall hillside give way to the river, it would completely bypass the Sunset and Canyon Falls reach, thus invalidating the entire project.

As some opponents have pointed out, it also flies in the face of one of the seven criteria submitted in the FERC pre-application documents which state that areas of consideration should have “no known geological hazards or unstable areas that would preclude construction.” It’s anyone’s guess if it could happen naturally anytime soon, but if blasting of the nearby bedrock were to proceed as outlined in the proposal, many residents worry about the effects it might have on the unstable slope. 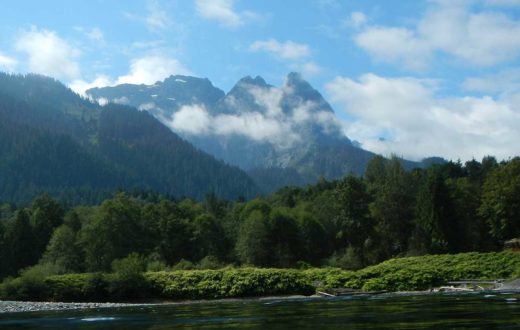