Twenty years ago, the annual run of alewives (a migratory fish essential to the marine food web) up Maine’s Kennebec River was zero. Today, it’s five million — thanks to the removal of Edwards Dam and additional restoration measures upstream. The Kennebec and its web of life have rebounded in many ways since Edwards Dam came down in 1999. 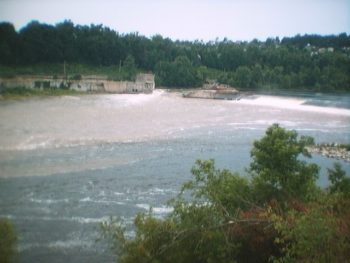 A rush of water surged through Edwards Dam as the Kennebec was freed on July 1, 1999

The removal of Edwards Dam was significant because it was the first time the federal government ordered a dam removed because its costs outweighed its benefits. The restoration of the Kennebec sparked a movement for free-flowing rivers in the U.S. and around the world.

According to the dam removal database maintained by American Rivers, 1,605 dams have been removed in the U.S. since 1912. Most of these (1,199) have occurred since the removal of Edwards Dam in 1999. The year with the most dam removals was 2018 (99 dams removed). 2017 was the second most productive year, with 91 dams removed.

The lesson from the Kennebec after twenty years? Dam removal works. Our partners at the Natural Resources Council of Maine report that since Edwards Dam was removed on July 1, 1999, tens of millions of alewives, blueback herring, striped bass, shad, and other sea-run fish have traveled up the Kennebec River, past the former Edwards Dam, which blocked upstream passage since 1837.  Abundant osprey, bald eagles, sturgeon and other wildlife have also returned.

“The precedent setting 1999 Edwards Dam removal continues to surprise us all with the dramatic recovery of the river and its native fish,” said Steve Brooke, who worked for American Rivers in Maine and led the Kennebec Coalition. “Each year the numbers of returning fish grow and document the fact that our rivers can restore themselves given a chance.” 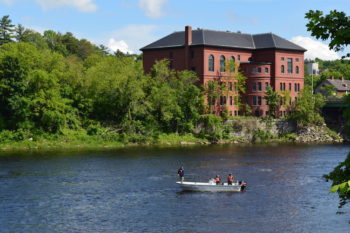 On a basic level, dam removals matter for the specific rivers and ecosystems that are restored to health. But looking at the bigger picture, dam removals also matter in terms of our relationship with all rivers – because with every individual act of restoration we’re creating a new and compelling picture of what the future can look like. We’re spotlighting the benefits that healthy, free-flowing rivers can naturally provide. We’re demonstrating the power of local citizens to drive positive change. And we’re proving that communities can reclaim their rivers and their stories.

Here’s a look at some recent river restoration successes – and rivers to watch for the next big opportunities:

On the Penobscot River, removing two dams (Great Works in 2012 and Veazie in 2013) and installing fish passage at others opened nearly 1,000 miles of habitat to migratory fish. Thanks to modifications at other dams in the watershed, hydropower production on the river has remained the same. Learn more

In dam-dense New England, partners are working across hundreds of rivers and dams to reconnect habitat. We are excited about the upcoming removals and potential for new dam removal projects that would hold big wins for migratory fish, including dams on the Ipswich River in Massachusetts, Sheepscot and Presumpscot Rivers in Maine.

This summer American Rivers staff and partners in North Carolina are kicking off a project to remove the Ward’s Mill Dam, which is the #1 ranked dam in the North Carolina barrier prioritization tool. This project will improve public safety, habitat for eastern hellbenders and freshwater mussels and recreation.

American Rivers is also working in the Cullowhee community in North Carolina to remove a deteriorating dam that currently provides the pool where Western Carolina University and the county draw their drinking water. We are working closely with our partners to envision a “run of river” intake that does not rely on a dam to provide drinking water. This project will support a resilient water supply, expanded habitat for endangered species, and create recreation opportunities in a river park.

The Potomac River Industrial Dam is located on the North Branch of the Potomac River in downtown Cumberland, Maryland. This outdated infrastructure not only blocks 43 miles of habitat for American eel and other aquatic species, it is a barrier to the city’s broader vision for a thriving river-centered recreation economy. With ownership of the structure in question, the project has remained in limbo. Now is the time to refocus on efforts to address this unsafe dam.

Removal of Elwha and Glines Canyon dams began in 2011 and was completed in 2014, and since then the entire watershed — from the headwaters in Olympic National Park to the sea – has rebounded back to life. Learn more

Removal of the Middle Fork Nooksack Dam near Bellingham will begin in the summer of 2020. The effort will reestablish access to approximately 16 miles of critical spawning and rearing habitat for Puget Sound Endangered Species Act listed chinook salmon, steelhead, and bull trout. The project will also maintain the City of Bellingham’s municipal water supply.

Removing four dams on the lower Snake River in eastern Washington provides a once in a generation opportunity to recover endangered wild salmon and steelhead runs in the Columbia-Snake watershed (including Idaho’s Salmon and Clearwater rivers, northeast Oregon’s Imnaha and Grande Ronde, and southeast Washington’s Tuccannon), while creating new economic opportunities and investing in a clean energy future.

Five dams were removed from the Baraboo River, beginning in the 1990’s. Since then recreation has increased and surrounding communities plan to add new opportunities for water recreation and riverside trails. They hope to earn National Water Trail Status with the longest free-flowing (120-miles) and fully-accessible river trail.

American Rivers and our partners are calling for removal of two U.S. Army Corps of Engineers locks and dams on the Mississippi River in Minneapolis. Restoring a free-flowing river in the Mississippi Gorge would create new recreation and economic opportunities, improve fish and wildlife habitat and allow the Twin Cities to reconnect with a revitalized river.

Removing two aging dams on the Kinnickinnic River in River Falls would revitalize and restore the Lower Kinni’s cold water habitat, resurrect an entire mile of this world class stream, and fully restore the historic Junction Falls waterfall in the heart of the city. Learn more

The Cleveland National Forest removed 33 dams in total—18 dams from Holy Jim Creek, four in upper San Juan Creek, 10 in lower San Juan Creek and one from Trabuco Creek—in 2018. The dams were originally constructed for varying uses; however, years of disuse and, in some instances, a 40-year maintenance backlog resulted in the decision to remove these structures as a way to restore these streams and provide access to habitat for fish and wildlife. The efforts of the Cleveland National Forest demonstrate the power of coupling smart management of outdated water infrastructure with the potential re-establishment of extirpated species like the southern California steelhead trout.

Removing four dams on the Klamath River – slated to begin in 2021 — will restore more than 300 miles of salmon habitat for salmon, and improve water quality. Learn more

Want to keep up to date about river restoration successes? Sign up and we’ll share news and alerts.