It can get downright hot in The Sunflower State. Fortunately, there’s more than 170 miles of cool Kansas River flowing through the heartland to help take summer’s edge off.

The Kansas River, or “Kaw” as it’s affectionately known, is its namesake state’s most popular river for canoeing, kayaking, rowing, and fishing. Unlike many of its midwestern neighbors, the river has not been over-engineered with dams and navigation control structures, rendering it relatively free-flowing. As a result, hundreds of acres of sandbars and islands are sprinkled among meandering riverbends, providing animal habitat and opportunities for boaters to pull ashore to camp and get close to nature on what may be the top recreational treasure in the state.

As the largest tributary of the Missouri River, the Kansas is considered one of the world’s longest prairie rivers, beginning at Junction City, KS, and flowing to Kansas City. Along the way it serves as a critical drinking water supply for more than 600,000 people in addition to being used for irrigation, municipal wastewater and industrial discharges, cooling water for three coal-fired power plants, and a source of commercial sand and gravel.

But the Kaw has an undeniable fun side too. The river is dotted with more than 20 public access points and the U.S. Department of the Interior has declared the Kansas River Water Trail one of its Top 101 Conservation Projects. Canoeing and kayaking revenue is calculated at about $3.7 million per year in Kansas.

The University of Kansas rowing team uses the pool above the Bowersock Dam — the largest obstruction on the river — for training, and the Kansas City Boat Club regularly rows on the final reach of the river, near the confluence. The river and its tributaries are also home to fourteen threatened or endangered fish species.

The Kansas River is no stranger to American Rivers’ Most Endangered Rivers® list, having been included five times since 1995. Some progress has been made since the most recent in 2012, although the Kaw still faces many threats. The most intense among them are impacts from in-river sand and gravel dredging used to make concrete. Dredging widens and deepens the river channel, lowering the water level of the river and the water table.

Dwindling access to water is a major threat to animals, humans, plants, and a significant agriculture industry in Kansas, especially when the looming concern of climate change is factored in. Scientific studies show that dredging a prairie river like the Kaw is particularly harmful since when sand is removed, the river attempts to fill the holes by carving away soil from the riverbanks. That erosion damages valuable farmland and wildlife habitat, to say nothing of the taxpayer-funded infrastructure like flood control structures, bridges, roads, and intake pipes for public water supplies.

The Corps of Engineers granted five-year permits for dredging operations at 10 locations along the Kansas River in 2007. But those permits to extract sand and gravel from the river stipulate that they would be terminated in any five-mile reach of the river where the average riverbed elevation dropped more than 2 feet. At least three of those permits have since been terminated, and a 2014 environmental review prompted the Corps to require a full Environmental Impact Study (EIS) before the remaining dredging permits on the Kansas River will be reauthorized.

The EIS is expected to be published in late 2016. The current permits, originally scheduled to expire Dec. 31, 2012, have been extended through the process.

The time has come to end the harmful practice of dredging in the Kaw and move on to addressing other issues. The river, for example, also drains more than 53,000 square miles of prime commercial farmland, and suffers greatly from fertilizer and animal waste pollution.

The U.S. Army Corps of Engineers should complete a new Environmental Impact Study on dredging, deny all new permit and tonnage requests, and end dredging on the Kansas River by 2017.

About the Kansas River

The state of Kansas was named for the river. Its name (and nickname) come from the Kanza (Kaw) people who once inhabited the area.

When including the Republican River and its headwater tributaries, the length of the Kansas River system is 743 miles, making it the 21st longest river system in the U.S.

From June 26-29, 1804, the Lewis and Clark Expedition camped at Kaw Point at the river's mouth. They praised the scenery in their accounts and noted the area would be a good location for a fort.

Because of its shallow depth, slow drainage, high silt contents, and proximity to industrial centers, the Kansas River was ranked as the 21st most polluted water body in the U.S. in 1996. 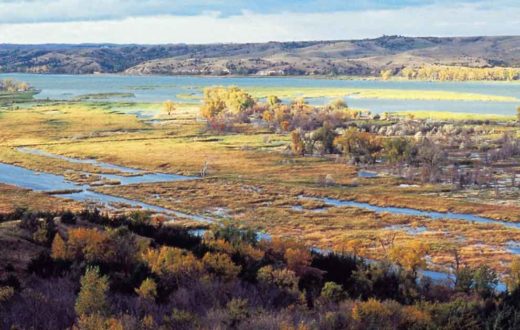