Washington, D.C. – American Rivers today named the Stikine River among America’s Most Endangered Rivers® of 2019, citing the grave threat that current and proposed mining projects pose to the river’s salmon, culture and economy. American Rivers and its partners called on the International Joint Commission of the U.S. and Canada to stop the mining projects from devastating the river, its salmon and communities.

“The America’s Most Endangered Rivers report is a call to action to save rivers that face a critical decision in the coming year,” said Jessie Thomas-Blate with American Rivers. “Now is the time to stop the mining projects that threaten the Stikine River and an entire way of life.”

The Stikine is threatened by the pollution from an operational mine at the headwaters—the Red Chris Mine, with others proposed nearby. These mines are extracting minerals, including silver, gold, molybdenum and copper. The Red Chris Mine is owned by the same company, Imperial Metals, responsible for a massive dam failure in 2014 at its Mount Polley site that polluted lakes and rivers with 24 million cubic meters of toxic waste. Mines have to keep their tailings (toxic ore waste potentially containing cyanide, arsenic, and/or mercury) immersed in water in perpetuity. The earthen dams holding the tailings at the Stikine mines are engineered in the same way as the failed dam at Mount Polley.

Loretta Williams, Chair of the First Nations Women Advocating for Responsible Mining, explains why a repeat of the Mount Polley disaster in the Stikine would be tragic. She stated, “I am from the Tsilhqot’in Nation and we are The River People in the interior of British Columbia, Canada. Our 6 communities are near three river systems, Chilko, Chilcotin and Taseko Rivers which are the headwaters to the mighty Fraser River which is another system where we have a Tsilhqot’in community. The Fraser River has been hard hit by industry, including mining companies. The Dam of Imperial Metals’ Mount Polley Mine breached causing destruction to everything downstream and that flowed into the Fraser River. There still hasn’t been any acknowledgement from the company of the devastation they caused and no real efforts to fully restore the ecosystem to what it was. Taseko Mines Limited continues to dump effluent into the Fraser River from their Gibraltar Mine and Taseko is proponent of the Pebble Project in Alaska. How much can a river endure in order to properly sustain itself?”

American Rivers and its partners called on the International Joint Commission to stop allowing mining contamination to endanger the transboundary Stikine River. In addition, the groups called on the U.S. State Department to request an immediate moratorium on new mines or mine expansions based on a lack of analysis of the cumulative and downstream impacts to water quality and fish habitat.

According to Rob Sanderson Jr., Board Chair for the Southeast Alaska Indigenous Transboundary Commission (SEITC), “It is vitally important that our transboundary rivers be preserved for future generations. Our entire way of life is being threatened by corporate mining and greed!”

The Stikine River flows from an area known as the Sacred Headwaters in British Columbia into Southeast Alaska. The Tlingit, Haida and Tsimshian people have occupied this region for more than 10,000 years. The Stikine supports five different species of salmon, as well as moose, geese, deer and multiple other game that are integral to the diet of the entire community.

“Rivers and tributaries are the lifeblood of our homelands for all walks of life,” said Williams. “Without that vein, all that depend on those waters will slowly diminish. Losing a river system will severely interrupt an ecosystem and our culture. The return of the spawning salmon is a cycle that we depend on annually. The teachings that go with that cycle are very important to our people. If we were to lose that entire ecosystem, that will extinguish our connection between teachings, stories, language and sustenance. As mothers, we will do all that it takes to preserve and protect what is existing, because it isn’t much anymore, not like the abundance we once had. We stand united with all First Nations to preserve our rivers.”

The annual America’s Most Endangered Rivers® report is a list of rivers at a crossroads, where key decisions in the coming months will determine the rivers’ fates. Over the years, the report has helped spur many successes including the removal of outdated dams, the protection of rivers with Wild and Scenic designations, and the prevention of harmful development and pollution.

This is the first time that the Stikine River is included on this list. Other rivers in Alaska listed as most endangered in recent years include the Chilkat River (2019), Colville River (2018), and Rivers of Bristol Bay (2018, 2011).

America’s Most Endangered Rivers® of 2019

#4 Green-Duwamish River, Washington
Local leaders must produce a flood protection plan that safeguards communities and restores habitat for chinook salmon — fish that are essential to the diet of Puget Sound’s endangered orca whales.

#5 Willamette River, Oregon
The U.S. Army Corps of Engineers must immediately improve 13 dams to save wild chinook salmon and steelhead from going extinct.

#6 Chilkat River, Alaska
The Japanese investment firm, DOWA, must do the responsible thing and back out of a mining project that could decimate native salmon.

#7 South Fork Salmon River, Idaho
The U.S. Forest Service must safeguard endangered fish by denying a mining proposal that could pollute this tributary of the Wild and Scenic Salmon River.

#10 Stikine River, Alaska
The International Joint Commission of the United States and Canada must protect the river’s clean water, fish and wildlife, and indigenous communities by stopping harmful, polluting mines.

2019’s “River of the Year”: Cuyahoga River, Ohio
American Rivers celebrates the progress Cleveland has made in cleaning up the Cuyahoga River, fifty years since the river’s famous fire that sparked the nation’s environmental movement.

American Rivers believes every community in our country should have clean water and a healthy river. Since 1973, we have been protecting wild rivers, restoring damaged rivers and conserving clean water for people and nature. With headquarters in Washington, D.C., and offices across the country, we are the most effective river conservation organization in the United States, delivering solutions that will last for generations to come. Connect with us at AmericanRi 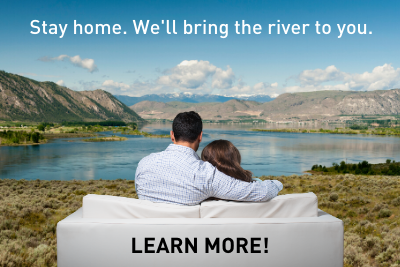