The Yampa River is the last undammed major tributary of the Colorado River, and it runs through one of the most remote locales in Colorado: Dinosaur National Monument. Located in the far northwestern corner of our state, Dinosaur protects some of the most spectacular canyons on the continent—a geologic time capsule far from the beaten path. The original 80-acre monument was set aside by President Woodrow Wilson in 1915, six years after Carnegie Museum paleontologist Earl Douglass discovered dinosaur bones at the site. 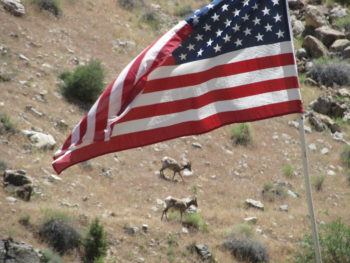 In the 1930s, presidential proclamations expanded Dinosaur National Monument twice, enlarging it to 210,000 acres to protect the famed gorges of the Green and Yampa rivers. Despite the breadth and depth of otherworldly canyons and sculpted slickrock preserved in Dinosaur National Monument, it flies below the radar of most Coloradans, and others visiting the West, as explained by Ralph Lee Hopkins in Hiking The Southwest’s Geology.

“It may come as a surprise that Colorado is more than just mountains. Although Colorado is deservedly called the Rocky Mountain State, west of the Rockies the incredible canyons, cliffs and mesas of the Colorado Plateau continue uninterrupted. Here, in a region known as Colorado’s ‘Western Slope,’ the Colorado Plateau’s sedimentary layers lap against the vaulted skyline of the Rocky Mountains. This is where you will find the cliff ruins of Mesa Verde, the red rock canyons of the Dolores River, the sandstone spires of Colorado National Monument and the canyonlands of Dinosaur National Monument.”

Perhaps the monument gets overlooked because visiting Dinosaur requires a six-hour drive (give or take) on remote highways from Colorado’s Front Range (i.e., Fort Collins, Denver, Colorado Springs), and once there asphalt vanishes from the map. But the opportunity to get off the beaten path and escape the masses is one reason why I’ve visited Dinosaur going on a half-dozen times now.

During the summer of 1995—while traveling across North America on a 22,600-mile, 3.5-month road trip (covering three countries, two provinces, one territory and 25 states)—I first set foot in the monument. That was my first taste of Colorado’s canyon country, of the wild Colorado Plateau, and I knew I’d be back. Canyon country has a way of doing that though. Sprawling across southern Utah, northern Arizona, northwestern New Mexico and western Colorado, the Colorado Plateau covers 13,000 square miles.

And as explained by Ed’s friend, David Petersen, in his canyon country classic, Cedar Mesa: A Place Where Spirits Dwell: “In fact and long ago, a shallow sea inundated most all of what is now the Colorado Plateau, its sandy shoreline ripples preserved for all eternity in the sandstone monument to time.” Largely as a result, the Four Corners states (UT, AZ, NM, CO) collectively contain over 45 national parks and monuments, 23 national forests, and more than 56 million acres of Bureau of Land Management lands.

After moving from Minnesota to Colorado in 1998, I resumed exploring Colorado’s canyon country and Dinosaur National Monument (during May 2001), chalking up a first visit to Echo Park and Harpers Corner in the heart of the monument. Then, in January 2005, the Gates of Ladore at the monument’s northern tip, followed (in October 2006) by a return to Echo Park, along with Deerlodge Park on the far eastern edge of Dinosaur.

Some eight years later, during June 2014, my adventurous girlfriend, Melinda Miller, and I rafted down the Yampa and Green Rivers through Dinosaur National Monument, starting at Deerlodge Park and taking out at Split Mountain four days later. The float is 46 miles on the Yampa, until it meets the larger Green River at Echo Park. From that junction it’s 25 more miles to the takeout, for a total of over 70 miles. This is Colorado’s version of the Grand Canyon.

Jaws perpetually agape, we gazed in wild wonder (and not infrequent disbelief) at the astounding surrounds: miles of sifted-sand beaches backed up by shady groves of box elder trees, tucked beneath the great sandstone walls for which the Yampa is renowned. We hiked to caves, pictographs and little waterfalls, sat out watching the stars, and enjoyed the backcountry cooking wizardry of our Adventure Bound River Expedition guides, Clarcie Hurtzman and Kai Gelatt.

Not far from Deerlodge Park the Yampa cuts through layered red and peach-colored sandstone, and the walls quickly rise to 1,000 feet or more, but then comes the true glory of these canyons (explains Milwaukee Journal Sentinel contributor Jeremy Schmidt, in “Free Flowing”): the Weber Sandstone, some 1,200 feet thick with hardly a crack to mar its massive rounded and overhanging presence. The Weber is almost white. It was formed from sand dunes, not from water-deposited sediments, which accounts for its striking uniformity.

Seen from river level, Jeremy adds, the massive white sandstone at the canyon’s core looks as smooth as pavement, but up on the surface it’s a wild turbulence of stone—carved, cracked and warped into a topography that defies travel. The river is by far the easiest (if not only) way to get through much of this country. We camped near Big Joe Rapids at the mouth of Starvation Valley our first night on the river, then (the following evening) at Boxelder Camp below Warm Spring Rapids.

On the morning of the third day, we entered a more open place, where the walls stood farther back from the river’s edge. This was Echo Park, a famous spot marked by a giant monolith called Steamboat Rock. Here the turbid Yampa meets the larger Green River, which flows down from the Flaming Gorge Reservoir in Wyoming. True to its name, the Green comes in clear and distinctly green.

Echo Park was the focus of an intense political battle waged in the 1950s. At issue was a proposed dam not far below the confluence of the Green and Yampa that would have filled both river canyons, and Echo Park, to a depth of 500 feet. But conservationists and enlightened foresight won the day, establishing a precedent that dams are not permitted in national parks and monuments.

At Echo Park we disembarked to explore local caves and petroglyphs before continuing down the Green River to Jones Creek, where we stopped to hike the Jones Hole (Creek) Trail to its confluence with Ely Creek, then up it to the appropriately nicknamed “butt crack falls” (Ely Creek Falls). There we watched youngsters placing their behinds in the smoothly polished creek channel, effectively backing it up (dam-like) before jumping up to release a miniature torrent of water over a small falls. That night we camped at Island Park, then continued downriver toward the takeout at Split Mountain.

To put the icing on this wild and wondrous float trip cake, above Moonshine Rapids we encountered four bighorn sheep, then a much larger herd not far from Split Mountain. Bighorn sheep go hand-in-hand with the surreal canyon country protected in the rugged backcountry of Dinosaur National Monument. And if nothing else, this trip burned into the core of our very being that (as Theodore Roosevelt once said), “There is nothing more practical than the preservation of beauty.”

Rivers Connect Us to our past and to each other. Do you have your own story about an experience with a river? We'd love to hear it!

Join more than 150,000 amazing people who stay up to date on news and ways they can help protect our rivers.