Hurricane Florence brought its full force to bear on the Carolinas. Winds of 100+ miles per hour caused wide-ranging damage, but the biggest impacts of this slow-moving storm were from rainfall – up to 3 feet in some areas. Record flooding occurred in southeast North Carolina and northeast South Carolina, flooding which persists in some areas almost 3 weeks after the storm.

The loss of human life, damage to infrastructure and displacement of whole communities are staggering:

This makes the fourth year in a row that the region has been walloped by tropical cyclones. Will 2019 be the fifth? Unfortunately, the blog’s message is just as relevant today as it was a year ago or the year before that. Hurricanes are more frequent, getting stronger and lasting longer according data from NOAA’s Earth Systems Research Center and reported by The Guardian. We have endured 15 above normal hurricane seasons during the past 24 years – a record. State elected officials in the Carolinas must take immediate and substantial steps to better prepare for the future hurricanes that climate change will bring.

Harvey. Irma. Jose. Maria. Is there an end to the alphabet soup of 2017 hurricanes affecting the Southeast and our citizens in the Caribbean islands? Most of the focus has been on other states and territories – Texas, Florida, the US Virgin Islands, Puerto Rico – and deservedly so as those areas have suffered devastation of historic proportions. We are somewhat fortunate in the Carolinas to have been spared the worst of the cyclones’ wrath this year and that no “rain bombs” caused dams to fail as with Hurricane Juaquin and Matthew. Yet often overlooked is that five people died in South Carolina due to Hurricane Irma, homes and businesses flooded, and life is not back to normal for many people along the Carolina coast.

This makes the third year in a row that hurricanes have blown past the Carolinas.

Final damage and economic impact estimates from Irma are still not known. We do know that 2015 and 2016 hurricanes and resulting floods combined damaged more than a quarter million homes, caused 93 dams to fail and, most tragically, resulted in the loss of 52 lives. The 2015 floods are South Carolina’s second most costly environmental disaster causing more than $12 billion of damage and economic impacts. Hurricane Matthew and its floods rank among North Carolina’s top environmental disasters with an estimated $2.8 billion dollars of property damage and $2 billion in economic impacts.

For decades scientists have been warning us that a warmer climate will bring more frequent and more violent storms to the Southeast. While the models are complex the concept is simple. Warmer temperatures evaporate more water adding more moisture to the atmosphere. This leads to more precipitation and more large storms.

That is exactly what has impacted the Carolinas for three years in a row. Will 2018 be the fourth?

There is no doubt that flooding is becoming more frequent and more severe.

The impacts of floods out rank all other natural hazards and predictions indicate that the size of nation’s floodplains will grow by 40 to 45% by the end of the century putting even more communities in harm’s way. We must adapt to changing conditions to ensure the safety of our citizens, their homes and our roadways from increasing storms and floods.

The political leaders of the Carolinas have largely ignored decades of warnings from scientists relying instead on a business-as-usual approach to floodplain development, poorly planned growth and dam safety. North Carolina actually outlawed the use of climate science for evaluating future sea level rise.

Will the lives lost, property damaged and dams failed be enough to convince the states’ leaders that we cannot continue business as usual?

Here are commonsense solutions to adapt to increasing floods that both states should put in place to save lives and protect property.

The leaders of the Carolinas must learn from the hurricanes and disastrous floods of the past three years, and enact 21st century solutions that protect families from future floods. We must adapt to changing conditions and cannot continue business as usual while lives are lost and our communities are devastated.

5 responses to “Will the Carolinas Protect Their Citizens From the Next Flood? — Hurricane Florence Update”

Weeks after Hurricane Harvey, Hurricane Irma is ravaging communities across the Southeast. Unfortunately, this... 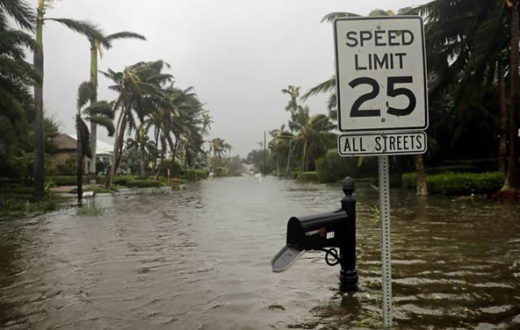