As the people of Houston struggle to recover from Hurricane Harvey, people all across America should consider contributing to the recovery effort and preparing for a flood in their own communities. American Rivers offers a few facts about floods to help people and communities prepare.

1. Floods are the most common natural hazards in the United States.

In terms of number of lives lost and property damage, flooding is the most common natural hazard. Floods can occur at any time of the year, in any part of the country, and at any time of the day or night. While heavy precipitation is the common cause of flooding, hurricanes, winter storms, and snowmelt are common, but often overlooked, causes of flooding.

Floodplains are the low lying areas that surround rivers and other water bodies that naturally flood on a frequent basis. Naturally frequent flooding makes floodplains the “lifeblood” to surrounding areas. They provide clean water and wildlife habitat among many other benefits including one of the most visible functions, the ability to store large volumes of flood water and slowly release these waters over time.

3. Wetlands in the U.S. save more than $30 billion in annual flood damage repair costs.

Wetlands act as natural sponges, storing and slowly releasing floodwaters after peak flood flows have passed. A single acre of wetland, saturated to a depth of one foot, will retain 330,000 gallons of water – enough to flood thirteen average-sized homes thigh-deep.

4. Over the past century, we have experienced more intense and frequent storms.

Over the last 50 years, Americans have seen a 20% increase in the heaviest downpours. With a changing climate, we know that the size of the nation’s floodplains will grow by 40 to 45% over the next 90 years, putting more people in harm’s way.

The 2011 flooding damages cost over $8 billion and caused 113 deaths, both exceeded the 30–year averages.

6. The federal government provides flood insurance to homeowners, but the National Flood Insurance Program (NFIP) is $25 billion in debt to federal taxpayers because premiums are not keeping pace with the increasing risk of floods.

Claims have increased significantly over the last 15 years due in large part from Hurricanes Katrina and Sandy, and Hurricane Harvey will certainly increase the overall NFIP debt. Most homeowners at risk of flooding don’t have flood insurance and are thus at the mercy of disaster assistance, which costs taxpayers billions of dollars per year in addition to claims paid by the NFIP.

7. Roughly 17% of all the urban land in the United States is located in the “100-year” or high risk flood zone.

If you live in a high-risk area and you have a federally backed mortgage, you must buy flood insurance. Flood insurance costs vary, but the average cost is $550 per year. If your community participates in FEMA’s voluntary Community Rating System (CRS), you can save up to 45% on your insurance premium. If you live near the 100-year floodplain, you should seriously consider purchasing flood insurance.

8. Over the course of a 30 year mortgage, homeowners in the 100-year floodplain have a 1 in 4 chance or greater of being flooded – twice the probability of fire damage.

9. Flood mitigation practices that reduce the loss of life and damages to properties provide $5 in benefits for every dollar invested.

When homeowners and communities take steps to protect themselves and to reduce the impacts of flooding through mitigation practices such as elevating or flood-proofing their homes, moving flood prone structures out of harm’s way, and investing in “natural defenses” they can save themselves and taxpayer’s money because it’s less expensive to prepare for a flood than it is to keep cleaning up afterwards.

10. Levees can and do fail often with catastrophic consequences.

An estimated 100,000 miles of levees crisscross the nation. There is no definitive record on the exact number or the condition of those levees. We do know that over 40 percent of the U.S. population lives in counties with levees and that many of these levees were designed decades ago for agricultural purposes but now have homes and businesses behind them. Setting back levees to give rivers more room to safely carry flood waters is often the best way to protect communities from catastrophic floods. Giving rivers more room provides other benefits such as clean water, parks, and wildlife habitat.

2 responses to “In the Wake of Harvey, Ten Facts about Floods”

Our Thoughts Are With You, Texas

The devastation from Hurricane Harvey will be far-reaching. Our thoughts are with all of... 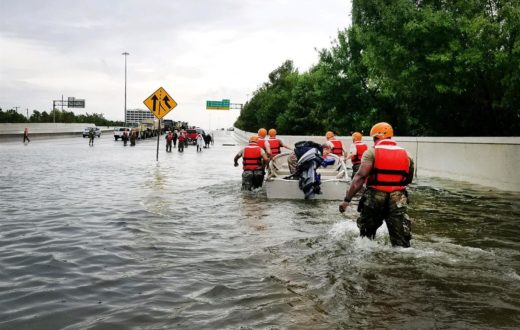